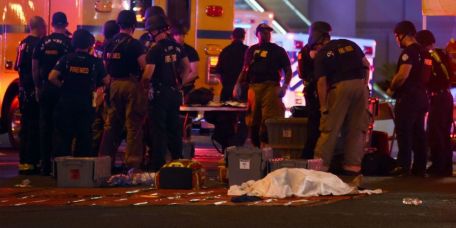 Stephen Paddock had his fifteen minutes of infamy.

A millionaire gambler who appeared to have it all made the decision to play judge, jury and executioner for a group of people he didn’t know.

What goes through the mind of someone who instigates the deadliest mass shooting in US history? What does it take to fire on a crowd of unknown people focused on enjoying a concert, murdering 58, injuring 527 before turning the gun on himself?

Nobody will know what Paddock was thinking before he let loose that barrage of bullets. Why he thought this was the right thing to do in this place at this time. It’s known he’d been there three days and had an arsenal of weapons that implied a desire to cause a lot of hurt and pain.

This is not a political issue. To politicize it takes away the value and dignity of those killed and hurt. It diminishes the courage shown by those who heroically threw themselves over friends and stepped in to help people to safety. Everyone of them has a story of significance.

To deal with this as anything less than a tragedy is wrong. It minimizes our humanity.

We can’t change what’s happened. Analyzing the minutia on the public stage turns it into a momentary horror. A second of sadness. Then most of us move on.

This is not about gun control. Those who want to hurt others and use a firearm to do it will find a way to get a gun. Laws won’t stop people bent on evil.

Evil does exist in the world.

The question of what to do about gun violence has been around for years. Some folks demonize the NRA while others whole-heartedly support them. There are those who believe we need freedom from easy gun accessibility and others who say we need freedom to bear arms to protect ourselves.

Those aren’t the issues. The truth is freedom without virtue and compassion is chaos.

A former vice president and senior counsel for CBS was fired after an inappropriate Facebook post where she commented about those attending the country music concert were probably gun-toting Republicans for whom she had no sympathy.

Did she really not care about the dead? Was she really so calloused toward people she didn’t know? Her apology was heart-felt, but what she’d done was practice free speech.

Without virtue or compassion.

If I want to change my world, I need to begin with me. Treating others with kindness, recognizing their value and seeing them for who they are.

The Bible calls it the Golden Rule. Jesus said to treat others as we want to be treated. Which means putting actions to our words and not just talking to get those golden sound bytes for social media.

It’s a great goal, but we can’t do it ourselves. All the laws and self-help books in the world can’t give us what we need to be kind and care for all people–friends and enemies alike.

It takes heart transformation, which only Jesus can provide.

Washington can’t save us. No matter who’s in the top seat.