Let It All Hang Out–In Style

It’s all about opportunity. And a little hard wiring.

At the wedding of Kate and Alex this past weekend, festivities included a dance floor. And a DJ with a sense of humor.

Huck, my kindred-spirit grand from Austin, could hardly be contained. At two, he’s got more energy than the rest of the family 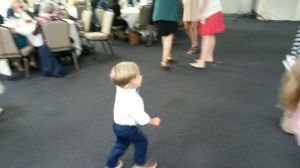 And he has rhythm.

Like many weddings, it took time and a few songs to get anyone out on the dance floor. Moms dancing with their kids are the first out. Then the older kids. Then the Millenials. My age group rarely gets out there, whether out of embarrassment or because the popping of joints conflicts too much with the music. It’s a toss up.

I was out there for a bit, dancing with my girls. Decorum be hanged.

Huck wasn’t waiting for anyone. When the music began, he was out there, clapping to the beat and moving like a whirling dervish. He didn’t let up. He moved from one song into another, trying to get some of the little girls to dance with him. All of them were “older women”. Five, six years old. They wouldn’t dance with him, but that never dampened his spirits. Alex’s nephew finally took pity on him and danced with him around the room.

His face went beet red, but that didn’t slow him down. His exuberance is all part of who he is. He has two speeds: off and full throttle. 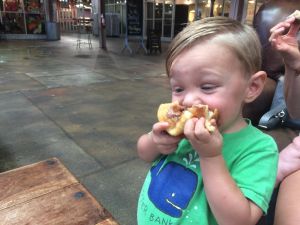 The day after the wedding, as we were packing up and getting ready to fly to our individual destinations, we decided to go to a local donut shop that had a stellar reputation and more types of donuts than I could imagine. He grabbed his in two hands and dove into it like someone who’d been without food for weeks.

Exuberance. Joy. He’s not embarrassed by what others might think. He doesn’t feel shame because his dance moves are a little over the top. He’s not self-conscious because he’s living out loud.

He knows how to enjoy each day. He moves to the beat of his own drummer and doesn’t care if the drummer doesn’t belong to any recognizable band.

As I’ve gotten older, I’ve lost some of that spontaneity. That whimsical approach to life that can be lived out with eyes wide open, fearing nothing but not trying.

I want to have more of that whimsy and fun. More of the unplanned and unscripted. More of the freedom to enjoy the moment without worrying about what might happen tomorrow.

God lives with us in the moment. Reminding us what He’s faithfully done in the past, how He will faithfully show up in the future.

He wants us to live now with the joy with which He created us. Live today, not stressing about the things we can’t control tomorrow.

Some may say, “I don’t think He had such a great time making me.” Wrong. The great delight the Lord has in you, having been made in His image, is beyond what we can comprehend.

Enjoy the person God’s made you to be. Don’t compare yourself with others. Our uniqueness is a gift. To be celebrated.

Add a little rhythm, and you’ve got it made.