To TP Or Not To TP; That Is The Question

Who knew a simple roll of toilet paper could provide so much fun?

John and I were watching the grandkids a few days back, and it was one of those times where everyone was a little grumpy.

We’d mowed the yard. They’d played soccer. Had been in a car and driven enough miles around central Florida to not want to do anything but be vegetative.

One-year-old Ryken refused to nap. He needed one. I needed him to need one. But after over a half hour of weeping and wailing, I relented and got him out of bed.

And prepared for the grumpies. 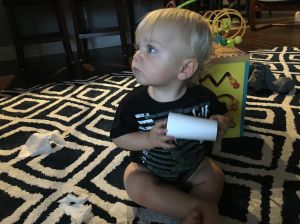 He wasn’t interested in toys. Music. None of the things that usually distracted him from a bad mood.

I had a momentary lapse of attention. He escaped into the bathroom and knocked the toilet paper holder down. Sent TP rolling across the floor.

It caught his attention.

He picked it up and found it was easy to tear. (Single sheet cheap. Not double sheet plush. We’re not designer tush people.)

Ryken has quite a throwing arm, so he began heaving small pieces of tissue as fast as he could rip them off. Little pieces of white were floating around the family room. He got frustrated with the floaties and began to just unroll and rip.

He was making a mess. The room began to resemble a giant toilet. Minus the solid floaties. I’d just vacuumed. I should have been irritated.

All I could do was laugh.

It wasn’t about wasting a dollar roll of toilet paper or messing up a newly cleaned room. It was enjoying the moment. With great delight. Watching Ryken work hard at ripping tissue.

He got frustrated. The roll didn’t end. (It had 1,000 sheets. Practical.) No matter how much he tore off, more was there. He wrapped up in it. Walked on it. Threw it some more.

It didn’t matter that he was undoing the cleaning I’d done. It made no difference that there was a mess that would have to be picked up. All I wanted to do was sit and enjoy the antics of my grandson.

Which brought an aha moment.

That’s how God looks at us. With great delight and enjoyment.

He knows all the bad choices I make, the wrong things I do, the hurtful things I say and think.

He knows when I have my own grumpies.

That doesn’t lessen His love for me. Knowing Him personally changes everything.

“So you have not received a spirit that makes you fearful slaves. Instead, you received God’s Spirit when He adopted you as His own children. Now we call Him, ‘Abba, Father.’”   Romans 8:15

As my Father, He delights in me. Enjoys me. He’s made me His own. Abba is the Greek word for Daddy. A term of endearment, a close-knit relationship.

To be thoroughly loved and delighted in. That gives me value. Significance. To the God of all creation.

I matter to Someone whose love for me won’t ever end.

That’s worth more than a roll of toilet paper.

8 responses to “To TP Or Not To TP; That Is The Question”