Once every four years, the whole world focuses on futbol.

The hard running–no breaks for 45 minutes–use your feet and head futbol.

With the World Cup running now through sometime in July, there isn’t anything being watched more around the world.

How can you not love it?

I’ve been an ardent supporter of US soccer for years, but knowing our boys were beginning their World Cup experience in the Group of Death made it all the more exciting.

Being with three top-ranked teams in the first round, no one expected them to pull off a miracle.  How can you against teams that have a reputation for being unbeatable?

You’ve got to love the tenacity of the underdog.

Whatever happens from here on out, the US Men’s Soccer team has nothing to be ashamed of. They’ve truly left it all on the field. 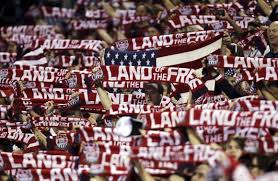 And they’ve encouraged their fans in the process. There’s more patriotic fervor over this team than just about anything else American right now. Played on the global stage, the big contracts, the political pull, the “who you know” name droppers don’t matter.

You’ve got to love the exuberance of the fans as they cheer their teams on. The energy that’s on the field and in the stands as country plays country for the chance to win a trophy with a gold ball.

People are passionate about this game. You could call the fans avid–or rabid, depending on your perspective. (One player actually did bite another one on the field during play. Talk about drama.)

What would it look like if we approached all of life with such passion and commitment?

What would it feel like to live full out, full on, eyes wide open with anticipation, as these players are playing? 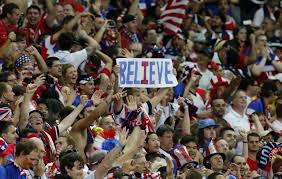 Too often I don’t see the passion in life. It’s easy to get excited about a once-every-four-years event. But the every day feels, well, every day.

Too often I live from experience to experience, letting gaps in time go by where I’ve not felt a whole lot of anything.

Just sitting around waiting for the next big thing.

God wants me to engage in the dailies. To embrace all of life with everything that I am. To see past the dailies to the eternal. There’s the prize.

“You’ve all been to the stadium and seen the athletes race. Everyone runs; one wins. Run to win. All good athletes train hard. They do it for a gold medal that tarnishes and fades. You’re after one that’s gold eternally.”   1 Corinthians 9:24-25

I’m not knocking that lovely golden ball that some country will win in the World Cup.

I’d like to see me sustain that kind of ambition, that drive, that passion for something eternal. Working on a true relationship with Jesus here is the guarantee of that eternal prize.

That’s an event worth winning.