What Posture Does It Take To Live Well? 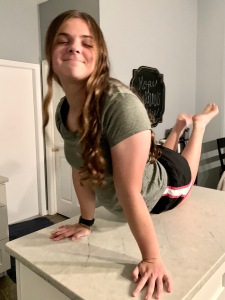 Our island in our kitchen is rarely clear. It invites stuff and clutter to rest on it, making it generally unusable for food preparation.

We had a brief moment where it was totally cleared. Sydney, who at 16 has a remarkably dry sense of humor and quick wit, got on the island and posed mermaid style. Think Ariel in “The Little Mermaid”.

Not a typical Sydney response; her humor runs more to verbal rather than physical.

Her physical posture me laugh.

Hans Christian Andersen would have been delighted.

I enjoy Disney’s version of this classic fairy tale better than the original. There’s singing, a wise and funny Jamaican crab, and a happy ending where the mermaid gets legs and her man.

In the original, she dies selflessly. A great story but a rough cartoon to woo the masses. In that story, the nameless mermaid has a fascination with the world of men. It causes her to seek out the sea witch, who cuts off her tongue as her price for legs so she never is able to speak or sing again. Every step she will ever walk is as if knives are cutting her feet. She endures pain and suffering for the love of the prince.

If she’s able to gain his love, she will also gain an eternal soul. If not, she would die and become part of the foam of the sea.

Her story ends when the prince marries another. Her five sisters try to save her by selling their beautiful hair to the sea witch for a knife. If the little mermaid kills the prince with it, she will return to the sea as a mermaid.

She can’t do it. Her love for him is greater than her pain, so she sacrifices her life for his.

Her good deed, however, gives her the chance to earn an immortal soul if she labors in goodness for three hundred years.

So many of our classic stories are those of sacrifice and redemption. Where love causes people to do extraordinary things for those they care about.

Disney’s rendition chose not to emphasize the degree of sacrifice it took for gaining earthly life.

We often ignore the reality of what it takes for us to be redeemed from the darkness, pain, and sorrow of our lives. We seek hope and truth in a world that has skewed both.

Jesus came to offer that sacrifice for us. In the words of Andersen’s “Little Mermaid”, He allowed His own soul to be crushed for us, His voice silenced by death, experiencing unheard-of pain on our behalf.

The little mermaid would have needed to work for three hundred years to gain her eternal soul.

All we need to do is receive the gift of Jesus’ sacrifice, a gift we can’t earn and can’t achieve by any amount of good works we do.

We don’t have to live up to a standard; neither do we need to keep paying for something that has been freely given to us.

Like the little mermaid, love was the catalyst for God to pay for our eternal souls with the death and resurrection of His Son.

It’s not a Disney ending; it’s permanent. And perfect.

Sydney in that mermaid pose?

She already has that eternal soul.

4 responses to “What Posture Does It Take To Live Well?”