Beat It; Just Beat It 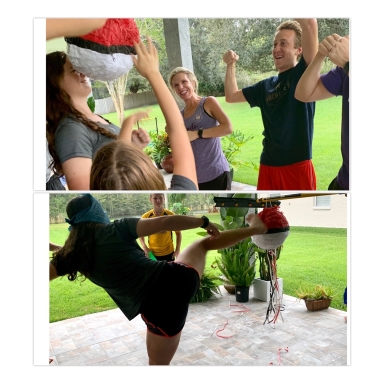 There’s something about a pinata that brings out the competitive spirit in everyone. Destroying a papier-mache shape filled with candy so it will empty its contents for all to enjoy is an indescribable delight.

Ryken, for his sixth birthday, wanted a pinata. He had a desire for gifts, but having a pinata was important. It wasn’t the candy, though that was a definite priority. It had everything to do with whacking the shape and being the one to break it and release its treasures.

I stuffed that papier-mache shape with Swedish Fish, Gummy Bears, Sour Patch Kids, and chocolate. Ryken is limited on what kind of candy he can eat–he’s both gluten-free and dairy-free. The chocolates were for his siblings. It was heavy with possibilities.

The kids had chances to smack the pinata as it hung before them, taunting them with its toughness. Then some of the adults took a shot, posing in their best baseball stance before swinging.

With all the hits taken, the pinata was dented, it lost its strings and definitely looked worse for the wear.

Sydney tried a roundhouse kick. Several of the adults started punching it. That papier-mache shape refused to give up its treasures.

One of my kids finally pulled out some of the candy from a hole in the bottom, and the pinata ultimately relented. Candy flew everywhere, and the scrambling for goodies began.

I’ve experienced my share of pinatas. I don’t believe I’ve ever seen one as tenacious and resolute to refuse to let go of what it held inside.

With the presence of social media, we hear attacks on everyone and anyone that doesn’t hold the same perspective as the person making complaints. There is a human tendency to believe we are correct in our thinking if we’re passionate about an issue.

Many in our country are experiencing the need for resoluteness like that pinata. A tenacity to stick with their beliefs no matter what the cultural norms are. To disagree brings harassment and criticism; that’s not the freedom this country was built on.

Jesus experienced incredible harassment from people in His time, particularly from the religious leaders. He stood firmly on God’s gift of grace and forgiveness, which is why He went to the cross to pay a penalty for us whose lives are messy and broken. Those in authority wanted the minutia of a law that couldn’t be sustained to be the determining factor in righteousness. Jesus held firm to truth; He paid the ultimate price for His convictions, for His passion for us who couldn’t keep an impossible mandate of perfection.

The beauty of God’s gift of free will for us is that we get to choose what we will believe. The reality of free will is we need to fully understand the consequences of our choices. The good and the bad. We can’t ignore the reactions to our choices.

We don’t agree with one another. Even those of the same mindset have differing perspectives. We need to choose our actions carefully, for the good of all, not just a select few.

Sometimes being the pinata is a stance of character we have to take.

Even when it hurts.

Posted by daylerogers on September 21, 2020 in Uncategorized and tagged Beat It; Just Beat It, consequences, Dayle Rogers, free will, God, grace and truth, Jesus, passion, passionate, pinata, religious leaders, Tip of My Iceberg.