What Does It Take To Be A Diva? 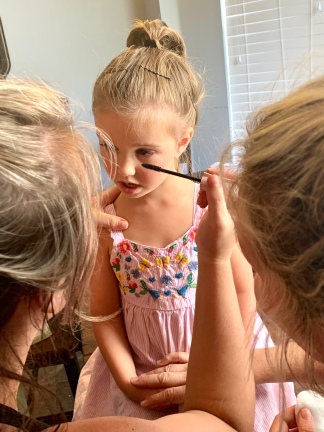 Brooklyn has been in a dance class for two years. The highlight of every dance year is the recital, with fancy costumes, parents, relatives, and friends watching enthralled, and the celebration that comes at the end of something done well.

The pandemic shut many things down, including such classes and performances.

The teachers became creative and practices were held virtually. Not the easiest way to learn dances with many children, but it was a valiant effort. The recital was scheduled for an outdoor venue. Parents only were asked to come, and the rest of us watched on Facebook Live.

What was fascinating was what it took beforehand to get Brooklyn ready. it made me grateful my kids chose to play soccer.

Hair was the first order of business. It needed to be up and off their faces; each costume had come with a special hair accessory to make it work. Brooklyn has long, baby-fine straight hair that needed to be curled. Tiffany, Brooklyn’s mom, left the styling to sisters Heather and Debbie.

The show actually began two hours before the recital.

Hair had to be combed into a high ponytail, bangs slicked back, and a multitude of curls made in the dangling hair. So much hair spray was used that I feared lighting a match would make us all toast. Brooklyn sat through this like a trooper.

Then came the makeup. She looked beautiful but older. My energetic grand looked like a little porcelain doll.

When she finally put the costume on, the transformation was complete.

All for ten minutes of fame as they performed their dance routine. Which in and of itself was delightful, since dancing with people they hadn’t seen in a while was a surprising distraction.

Hours of classes. Two hours of personal preparation to make her recital-ready. For ten minutes.

It was worth it to us as her family to see Brooklyn shine on stage. But as much as we enjoyed the performance, it was not life-changing.  A wonderful memory was made. Period.

How often in life do I spend an inordinate amount of time, focus, frustration, and stress on something that has no lasting meaning? Often without the accompanying grand memory.

Possibly the better question to ask is how often am I thinking of me and only me? When my focus becomes so self-centered that I’m not considering anyone else in their feelings and circumstances?

Brooklyn was diva for a day, and it was fun to see her in that role. But that’s not a sustainable role, not a place she lives every day. It was an opportunity to share talent in a public forum.

Too often, our public forums are about our grievances and criticisms. It’s easy to not agree with others–we’re all different. But I know me–when I spend so much time complaining and not doing something to help a problem, I become the problem.

God wants our focus to be on treating others with kindness, respect, and courage. To stand up for what’s right and not compromise our behavior because of anger or disappointment. To love others well.

Posted by daylerogers on June 29, 2020 in Uncategorized and tagged courage, criticism, Dayle Rogers, God, Jesus, kindness, public forums, recitals, respect, self-centeredness, Tip of My Iceberg, What Does It Take To Be A Diva?.