When The Merry Is Unwrapped 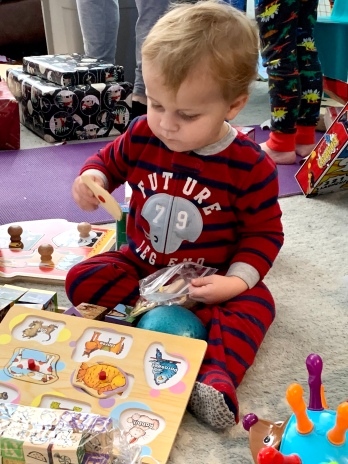 It began with a quiet pause, the dawn of Christmas when I was the only one up and no one had come to our home.

A restful space, between calm and chaos, where I could reflect on what the day was. Could be.

Christmas is the sacred space where true heart longing meets the One who can fulfill that need. Where hope finds its satisfaction in the Person who came on this celebrated day. My need to focus on that is often dwarfed by the overwhelming busyness of the season that overlooks the real reason it exists.

“We’re here!” Contemplative thought flew out my mind as the grands came in, bearing gifts and smiles and sweet anticipation of what was to come.

We read the Christmas story first, the words of that wondrous night coming to life as my son-in-law took the job of reading that had been my husband’s domain. My soul was at the place where I could picture the situation as it unfolded. Shepherds–not old guys in ragged clothes, but young boys, girls, women, and older women who were empty-nesters–watching the flocks at night. Seeing the amazing glow in the sky, unexpected and unheard of, a brightness that brought fear to them. Angels speaking to them, to these people who weren’t considered significant, telling them of the King who’d been born. The journey they took by faith to see the Baby.

It all played out in my mind. Calm covered me like a soft blanket.

And then the gift-opening happened.

We laughed out loud at the squeals of excitement from the littles who were awed by what they got. The older ones were graciously appreciative of their gifts, short on words but long on gratitude.

We ate a rich breakfast that none of us needed, drank more coffee than was necessary, and loved every minute of it.

Dinner was a conglomerate of friends and family who came together for a fiesta. Traditional food was rejected in light of ease–we all entered this season quite tired. More laughter, wonderful conversation, too much food.

I’ve been blessed with much; it’s made me think of what it was like that first Christmas.

Joseph and Mary were away from family and friends at a time when they needed help. Her first Baby, a pregnancy that had been a miracle that had put her under the scrutiny of others who insisted on believing the worst. Their accommodations were meager; no hospital, midwives, or health personnel to make the birth easier.

The Baby came anyway. It was time.

Inconvenient. Uncomfortable. No idea of what would come next.

But they stayed in the moment. At the place where God had done what He said He’d do; send His Son through a virgin, a situation which would make life awkward, unpredictable, and hard for all of them.

Sometimes the best presents come at a cost we hadn’t anticipated.

When all the merry is unwrapped and everyone moves on to the next big thing, what are we left with? What do we really have beside more stuff and clutter?

Comfort and joy. In Him who is the Author of Hope.

The best Gift that keeps on giving.

Posted by daylerogers on December 26, 2019 in Uncategorized and tagged calm and chaos, challenge for Mary and Joseph, Christmas story, contemplative, Dayle Rogers, inconvenient pregnancy, sacred space, shepherds, Tip of My Iceberg, true heart longing, When The Merry is Unwrapped.