The Story That Wouldn’t Be Told 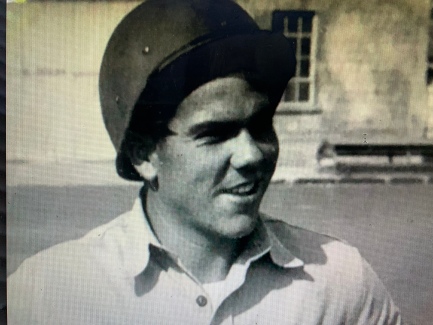 He never wanted to talk about what it had been like.

Dad would tell us stories of the men he grew to love.

But stories of the war? No so much.

Dad signed up to serve after the bombing of Pearl Harbor. Like so many other young men of his day, he felt a profound sense of gratitude for his country, which had given him and his family a home and a hope for something better. He was stationed at Pearl Harbor, part of the Navy, tasked with protecting what had been destroyed so the enemy couldn’t come any closer to the mainland.

A small-town Texas boy, he was an easy-going man who made friends quickly. He’d talk about the men on board ship, the poker games they had as they waited for orders or were in transit. People occupied his thoughts–not the war.

He’d served with some fascinating characters. When I was pregnant with my son, Dad asked what names I was thinking of for my boy. “Seth,” I told him. “I’ve always liked the name, Seth.”

His face fell and he shook his head. “If that’s what you choose, I’ll never be able to be close to the boy. I’m sorry.”

I was shocked. Dad was never that forceful about anything. He explained they’d been in transit, and a poker game was happening below deck. He had four aces, a hand he felt could win. He bet everything he had, only to lose to a guy named Seth, who had a king’s high straight flush.

A hard loss for Dad.

War is a worse loss.

As we celebrate Memorial Day, I’m reminded of all the people I know and care about who have had their lives gravely impacted in service to our country. Men and women whose lives have been snuffed out before they were able to live. Others so hurt by what they were part of, what they saw, that their lives have been forever changed by what others decided for them. The loss of those left behind by the faithful who chose to serve and didn’t come back.

These people deserve our respect and gratitude. It doesn’t matter if we don’t agree with the politics. Our perspectives about why we’re someplace don’t matter as much as our humble attitudes toward those who are willing to serve.

There is no greater love than someone willing to lay down their lives for others. That’s a Biblical perspective that shines the light on the value of people, not dismissing them as collateral damage or unworthy of our kindness. Every person has value.

Jesus demonstrated that when He went to the cross, not for anything He did, but for the wrongs we’ve done. He chose to sacrifice His life for those He loved.

I want to be grateful this Memorial Day. For being alive. For people in my life who have made a difference and have helped me be more the person I want to be. For all those who have made it possible for me to live as I do, with freedom to live and believe and hope.

It never hurts to be thankful.

Posted by daylerogers on May 27, 2019 in Uncategorized and tagged Dayle Rogers, gratitude, Jesus, love for others, Memorial Day, remember, sacrifice, The Story That Wouldn't Be Told, Tip of My Iceberg.