Real Love Is More Than A Feeling 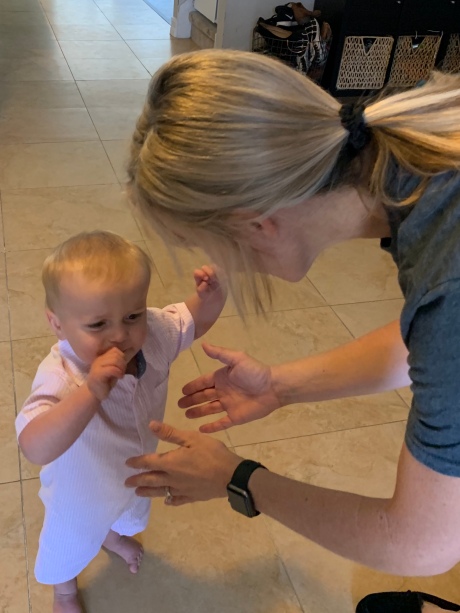 Cal didn’t care if it was a holiday. It didn’t bother him that lots of people were at their home to celebrate Easter.

He was miserable. His breathing wasn’t what it should be, so he was on medication that didn’t really fix anything. Just made him more awake in his misery.

All he wanted was his mom.

He walked around the house with his arms held high, alternating between a whimper and crying. Trying to get her attention as she welcomed others and engaged in conversation with those she’d opened her home to.

Others tried to pick him up. Including me.

He knew what he needed. Wanted. Mom. She’d make it all better.

Heather laughed and interacted with others, but when her little man came up and grabbed her attention, her focus was fully on him.

Her tone softened, her smile widened, and she reached down to pick him up and cuddle him.

His whimpering ceased. A small grin made its way to his face.

It’s not that his dad isn’t equally as loving and compassionate toward his son. The two have a beautiful boy bond that reflects a different need for Cal.

When he’s not feeling well or is tired, when he’s had enough of other people or wants to just be, he chooses Mom.

We all long for that nurturing, loving compassion in our lives. Some of us had it growing up; many didn’t. It seems counterintuitive when we’re made to be so relational and to trust.

God longs to draw us into that kind of trusting relationship with Him. So that He might lavish His love on us, walk with us through the rough times as well as the good.

To do so He had to turn His back on His own Son.

Jesus came to die. Nobody can blame the Jews, Romans, or angry crowds for that; they were witnesses of real love and humility in action. When Jesus went to the cross for acts He didn’t commit, people wanted to point fingers at who was responsible.

That would be God Himself.

When Jesus was nailed to the cross, the weight of all the wrongs of mankind was laid on Him. He paid a penalty we can’t pay. A perfect sacrifice to take care of our mess once and for all.

To do that, God turned His back on His Son, turned away from the ugliness He was dying for. A relationship that had existed for eternity was temporarily broken for us to be freed from the darkness of our souls.

If we choose to accept such an undeserved gift.

That’s true love. Not an emotion that makes people feel good; it’s a commitment that puts others first. No matter what the cost.

Cal reaches for his mom in need, knowing he will be welcomed into her arms, his needs fully met.

Because God chose His Son to take on our faults and failures, we can walk with assurance into God’s embrace. Which takes courage. It’s admitting I can’t do it on my own.

Jesus won’t turn His back on those who receive Him. Which takes courage to do.

Are you that courageous?