That Wasn’t In The Plan 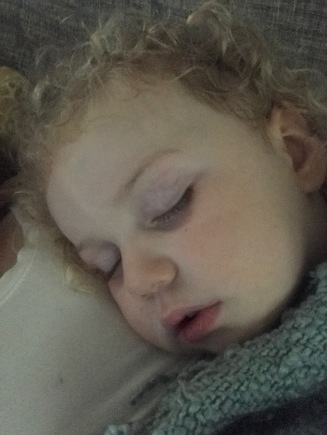 Living in the land of warm sun, beautiful beaches, and older folks, there are several things that are givens here.

Many tourists. We expect them. It makes for crazy traffic. We’re not New York City, but I think we may have the worst drivers in the country. (Am I pointing the finger back at myself? Well…)

Lots of humidity and mosquitoes, which the City Beautiful branding doesn’t embrace. Both need to be dealt with.

Yearly flu shots. Especially necessary for the very young and very old. They’re given in so many places of business that you’d think an ongoing epidemic here. Helpful, but they don’t protect from every strain of the flu.

My daughter makes sure her family gets flu shots every year. They have a little one, less than a year, and the flu for him would be harsh. I understand that.

Even with the shot, Sloane, at two and a half, got the flu. Two strains, to be precise. Protection and planning meant nothing to those little buggers in her system.

Sloane was lethargic and a little grumpy with her illness. They were giving her the recommended medicine, but it tasted so awful that the process of getting it into her was as miserable as the sickness itself. The four and a half hour nap made it all too real. Not the norm for Sloane, who has more energy than several her age put together and who considers nap time an opportunity to look at books, play or just talk out loud.

They’d taken every precaution. Being prepared for possibilities makes sense when people care for their children. Or for themselves. We all have a lot to do, plans to be expedited, goals to be accomplished. If illness can be controlled, if the unexpected can be regulated to what I’m prepared to deal with, a sense of confidence blankets me like false assurance that I’ve got this covered.

Who am I kidding?

There are so many things in life that I have no control over. I can work harder, plan my days well, and still feel unhinged by circumstances I hadn’t planned on. My friend just had an unplanned heart attack; thankfully minor. My sister-in-law just had an unplanned major stroke. We wait daily for updates.

We’re all control freaks. Some are more overt than others, but those of us who aren’t as obvious are passive-aggressive. Hedging our attitudes or actions in case something doesn’t turn out as planned.

Only God knows everything. To be God, He would have to have that understanding–beyond anything any of us can comprehend. He could make everything fine, answer all prayers as we ask, and we would be His marionettes, our strings pulled by an Almighty Puppeteer. He allows us the freedom of our choices–and the consequences that come with them.

Control is a myth. We can strive for it and experience frustration when we don’t have it.

Our mosquitoes, on the other hand, are painfully real.

Posted by daylerogers on March 4, 2019 in Uncategorized and tagged Almighty Puppeteer, control is a myth, Dayle Rogers, God, Marionettes, precautions and planning, relationship, That Wasn't In The Plan, Tip of My Iceberg.