Get Ready; Get Set; No 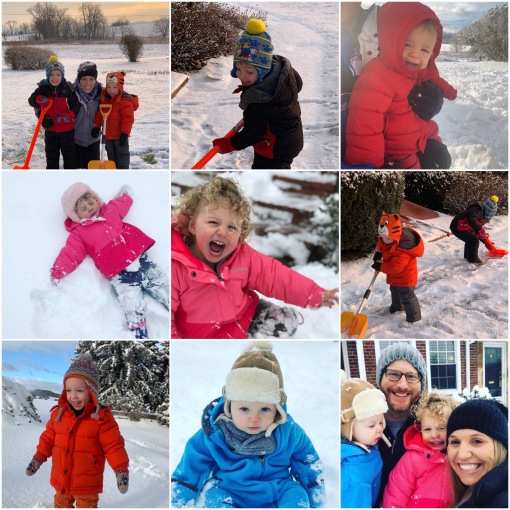 It’s January, and in Florida, that can mean 80 degrees of warm or 60 degrees of damp cold.

Northern friends grimace at the thought that I could freeze in 60-degree weather. It’s true.

Three of my kids are now living in the cold climes. Where snow is expected and temperatures drop below freezing.

My hands are cold just typing that.

Between Colorado, Washington DC and Pennsylvania, these three families live with the cold. Often enjoying it. Sometimes tiring of it. Always needing to deal with what it impacts–driving, school closures, and cabin-fever potential.

One-month-old Beck hasn’t had the chance to play in the snow. If his parents are any indication, however, he will learn to love it. A lot. The other five grands in the now frozen tundras of northern states see snow as the new playground of the hour.

Having lived in Florida more years than I haven’t, I forget how fun it was to take the kids sledding, to build snow people and animals, dig snow caves. To curl up in front of a fireplace with a cup of coffee and enjoy the quiet brought on by the blanket of white.

I also forget how much extra clothing we had to buy on a yearly basis. Snowsuits that would be outgrown in a year. Boots that barely made it through one winter season. Mittens that needed to be purchased by the case because it was the first thing lost.

And who can forget the reality of getting all the kids ready to go outdoors only to have the first one fully dressed tell me that a bathroom break was necessary.

All that work, only to have to repeat.

I’m not prepared for cold weather. I’ve learned to do hot and humid well. To appreciate the warm rays of sunshine that are familiar to me here. I no longer have the gear to play in the snow.

I’m not sad about it. Cold soaks into my bones quicker than it ever did when we lived up north. My extremities become so chilled that John shivers when I hug him. When the temperature in the house drops to 69 degrees, I’m walking around in flannel jammie pants, sweatshirt and holding a blanket around me.

There’s a lot in life that I’m not prepared for. Crises happen, and they always take me by surprise. They’re part of life. If I’m not in one at present, it’s just around the corner.

I’m not prepared for disappointment, hurt, loss, or being disrespected. But I don’t get up each day expecting the worst.

I don’t have to see it as a problem.

A friend reminded me of something our boss once said. He really had no problems. Jesus, however, had a bunch, because he would give all his hurts, struggles and pains to Him.

Jesus invites us to do just that. To cast our cares, our lack of preparedness, our worries on Him.

Because He loves us. And He’s our enough to deal with all that.