Did You Hear The One About The Tiger, The Lobster, And The Chick? 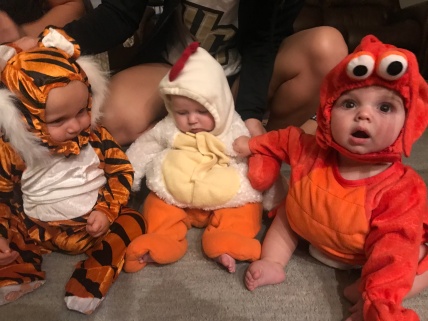 Halloween is not my favorite holiday.

I’ve got my reasons. Some logical. Others more personal opinion.

However, the grands love it. Four-year-old Ryken has been talking about it for weeks. He’s many costumes to choose from.

What really had me laughing was three of the under-a-year grandsons whose moms found costumes that made them look like living Beanie Babies.

These small, stuffed animals used to be collector’s items back in the day. People would buy all the new ones, keeping tags intact for possible resale later on.

I’ve got the real deal.

Nine-month-old Cal was the tiger. He tried the hardest to divest himself of his costume–the headpiece just about did him in. Six-month-old Mason was the lobster, complete with googly eyes and trying so hard to grab his dangly claws. Five-month-old Ward was the chick, and he just grinned through the ordeal.

They may not have enjoyed being in the costumes, but they were fascinated with seeing each other all dressed up. The adults in the room were in hysterics. The little tiger was growling, not to emulate what he was dressed to be, but because he was uncomfortable. The lobster sat and observed, much like a lobster would do underwater. And the chick flapped his little arms because he could.

There’s something so endearing about little kids dressing up. They’re imaginations run with them, and they can be anything they desire. It’s playacting at the moment, pretending not to be who you are. Enjoying the feeling of being somebody–or something–different.

Not quite so endearing as folks get older.

I’m not talking about the older teens who make a half-hearted attempt at a costume–a last-minute mask from Party City or make-up borrowed from mom or sister. They go door-to-door with pillowcases, wanting candy more than the fun of pretending.

I’m talking more about people who insist on being someone they’re not. Putting on a brave face or an “I-don’t-care” attitude. A persona that works now.

I do it all the time.

The older I get, the more difficult it becomes to share honestly with large numbers of people. To really be who I am in the moment because the moment may be painful. And I truly don’t want to be that Dayle Downer that shows up in a group. It’s so much easier to make a joke of what’s going on and how I’m doing.

It has nothing to do with people not caring. Everyone has their stuff, and we’re often so immersed in our own mess that seeing past it to others’ needs becomes difficult.

Jesus asks the hard questions. He sees me with all my cracks and missing parts. The messiness that’s me that loves to hide from others how I’m really feeling. What’s really bothering me.

I need Jesus in my life as the One who knows all of me. I don’t need to pretend–He sees through my facade. Being real before God is such a relief. To know Someone knows–and accepts–the real me.

But for the little guys–party on, dudes. Enjoy the pretend while you can!

Uncategorized
Beanie Babies, being known, Dayle Rogers, Did You Hear The One About The Tiger, dress-up, God, Halloween, hiding who we are, Jesus, Pretend, The Lobster And The Chick?, Tip of My Iceberg

2 responses to “Did You Hear The One About The Tiger, The Lobster, And The Chick?”