The Sweetness In Brokenness

Who doesn’t love to smack a pinata?

The idea of taking out frustration on a paper mache figure filled with candy and being rewarded for efforts of aggression is so darned satisfying.

The older you get, the stronger you become, the harder you can hit. The quicker the desired results.

We celebrated Ryken’s birthday with a family costume party and an emphasis on Yoshi and Scooby Doo. His two favorite characters. A green dragon that shoots eggs as weapons and a big dog that talks, beginning every word with the letter R.

Birthdays are memory makers. Not at my end of the spectrum, mind you. But the monumental passage of a year in the life of a little is a big deal. Ryken has talked about his birthday for months, thinking himself as four, wanting to 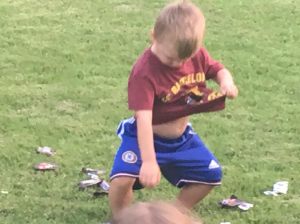 A great reason to celebrate. Recognizing that we’ve become what we’ve longed to be for so long. A dream realized.

I don’t look at birthdays that way.

The smashing of the pinata was a highlight for Ryken. The fact that it was a Scooby Doo pinata helped immensely. His one request–he didn’t want to be “blind”. Being blindfolded scared him. So eyes wide open, he was the first one to have a crack at old Scooby.

And the second, third and fourth.

Then the rest of the young ones took a shot at making the candy cascade out. When it came time for the older ones to have a whack, it was weakened. Considerably.

Ryken had the last couple of pops at it to complete the devastation. His dad shook out the remains.

Bringing freedom to the the pieces of candy.

Until they were eaten.

How odd is it that you have to hurt something and break it in order to get the good stuff out?

That’s a greater metaphor for life than I’d figured.

At a time when social media is allowed to define our culture and our individuality, it takes courage to be me. Not a sound byte that shows well in a few words or characters. Not a picture that captures a moment but hides the sory.

The real me is that person inside that I often choose not to show. The part that doesn’t want to be hurt, misunderstood, or not liked.

The part of me many don’t know.

I have to be willing to break through that outer shell–my messy, chaotic self–to let people experience my heart. The truth behind the me that usually shows up.

Jesus talks how owning my brokenness leads me to honesty with Him and a real relationship that provides genuine redemption. If I expose my own mess, I don’t have to keep taping the pieces together to appear fine.

Am I ready to have that carefully crafted exterior demolished for the sake of relating well to God and others?

I’ll take a whack at the image, one at a time. After all, I have a sweet and tender heart to expose.

Are you ready to crack the facade?