‘Cuz The Cousins Said So 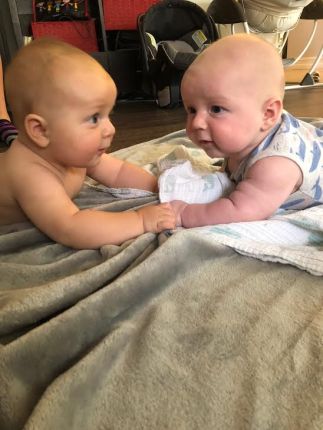 Cousins are a different breed of people.

They’re close family–and yet, not so much. Close enough to often have a strong family resemblance (in temperament if not in looks) and yet frequently living far enough apart not to have consistent contact.

My kids rarely saw their cousins. Between jobs and distance, it became a challenge to connect families on a consistent basis.

Our grands have a plethora of cousins. With six kids, five married, four having children and the fifth expecting, we’ve been inordinately blessed with littles who range in age from sixteen to almost born.

When they get together, the fascination because of differences is understandable. 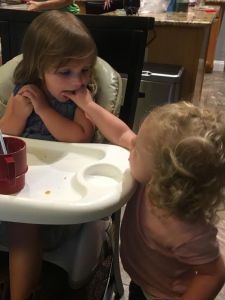 The similarities are hilarious. Especially the attitudes.

Brooklyn and Sloane are seven months apart. Both are quite verbal and have a knack for speaking their minds. Their initial response upon first seeing each other was hesitancy. Wary.

Wariness abated, and hide and seek sounded like a great idea. Brooklyn, at two and a half, told Sloane to count and she’d hide. Sloane nodded, covered her eyes, said, “One”, and raced off to find her cousin. Brooklyn patiently told her she was supposed to count. Sloane just as patiently said she wanted to hide.

So they hid together. And I had to find them.

They kept hiding in the same place. Made for an easy game.

The older the cousins get, the more they graciously interact with their younger cousins and engage the adults in their conversations. Teasing the littles about biting bugs and dripping boogers then turning to the adults and talking about their latest encounters with friends on “Fortnight” and what the new school year will look like.

There’s courage in their kindness. Understanding they need to work at this.

I have the chance to engage with folks each day. At work and doing errands. encountering people is what I do daily. How I choose to interact with them has a positive or negative impact.

My Dad used to say, “It doesn’t cost a thing to offer a smile and a kind word.” Being intentional about not talking on the phone while going through a check-out line so I can look at the clerk’s nametag and call them by name. Thanking them for their service. Not having my phone out when I’m with someone so I’m not checking texts as they come in. Smiling and saying hello to someone I pass on the street.

You never know what’s unfolding in their story.

I need to be courageous in my kindness. Not worry about what someone else has said about me, but treat them

the way I’d like to be treated. Not feel slighted if someone is treated better than I am but being grateful for what I do have.

Jesus calls it loving others as much as I love myself.

We live in a time when verbally attacking others is our norm. Questioning the motives of people is natural.

What if we were all courageous with our kindness and truly loved those who need hope, help, and love as much as we do?

After all, we all have the same Father.

Even better than cousins.