It All Comes Out In The End

Having surgery is never a happily anticipated event, even if it’s going to make significant improvements to life.

Having it when you’re ten weeks old is unfair.

Cal was known to have issues with his bottom shortly after birth. His plumbing wasn’t hooked up the way it should have been. Problematic. Digested substances need a place to leave the body.

It wasn’t immediately urgent. He got by because he’s a newborn and doesn’t have solid material to expel. But it would be something that would have to be addressed sooner rather than later.

The first doctor Heather and Jeremy took him to see had no idea what his problem was. He thought he’d have to go in to understand what needed to be done.

Not a fan of having someone excavating in his little bum area.

They switched hospitals and got another opinion from a doctor who knew what he was talking about. He’d seen the problem before and had successfully operated on babies with the same condition.

Knowledge and experience are necessary for people to have trust in a doctor. Or any professional.

Heather and Jeremy handled the situation well, but there was anxiety as they waited out the process. There are no 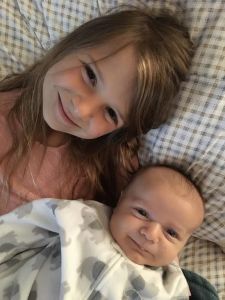 guarantees when you put a tiny person under anesthesia for 45 minutes.

The family text sent out once he was in recovery showed their joy. “He did great! We have follow-up with the doctor on Thursday. Now he’s just super groggy and hoarse (from the breathing tube). But we are headed home. Thank you all for praying!!!”

We had all prayed. No one wanted to think about the possibility that the surgery wouldn’t be effective or that he’d have an adverse reaction to the anesthesia. We were grateful for the positive results.

Because we love our boy.

Nobody wants to see their child suffer. No one would ask a child to suffer unnecessarily. The love between parents and their children is a sacred trust. Children rely on us to do what’s right for them.

I think about this as Good Friday is coming. When Jesus was brutally beaten to the point of being unrecognizable. Then nailed to a cross in the most heinous of executions the Roman Empire could come up with. Unbearable pain lasting for hours.

God the Father allowed His Son to go to the cross for things He’d never done.

Jesus died in our place. Because He loves us.

If there’d been a way to redeem our brokenness without the pain and suffering, I’m sure it would have been done. But a pure and perfect sacrifice for our wrongdoing needed to be made. And only one Person fit the bill. And was willing to do it.

Because He loves us.

What’s good about Good Friday? Redemption was offered to us. Across the board. A chance to know God, to be reconnected with the One who created us. It’s hope in spite of pain, love in light of suffering, life instead of death.

Not something a Father easily chose for His Son. Something He allowed for the sake of the many He loves.

Wanting to redeem rather than lose.