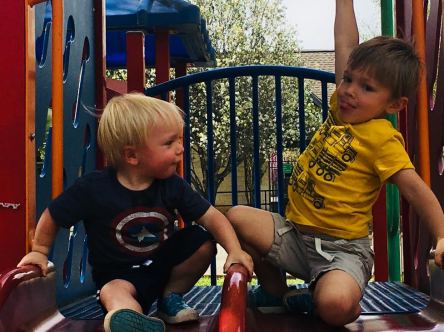 Having raised five daughters and a son, I’m well versed in drama, fashion disasters, bad hair days and PMS. My son gets it better than most men.

He, however, feels somewhat redeemed having just had his third son.

Boy families don’t show up the same as families with lots of girls.

Time with the grands in Austin has been filled with dirt, mud and wheeled vehicles–cement trucks, cranes and garbage trucks. Huck and Landry know the difference between an excavator and a backhoe. They patiently explained the distinction with sadness that Nana didn’t understand such things. “Oh, you’re a girl.” 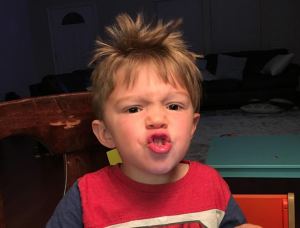 Bed head doesn’t get any cuter.

They show their affection for one another with toughness. One of the current favorites is making boy pancakes–where one tries to flatten the other as they bounce on each other. Racing, pushing, punching (lightly, of course), and making bodily noises all contribute to boy enjoyment.

Fashion polarizes the genders. Where girls often think about how they look, little guys don’t typically care to match clothes. Cars match cars, right? Anything with dinosaurs goes with everything. None of it will stay clean anyway.

“Bonk the Brother” is a fun game that happens when a toy, stick or something equally fearsome is in the hands of one brother and is applied to the body or head of the other. It can be done gently, in fun. 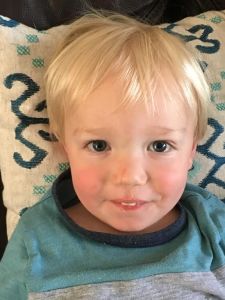 That grin hides a mischievous mind.

When one brother is bothered by the other, has had a personal item taken with perceived wrong motives or feels wronged, the blows become rougher. Tougher. Screams of glee become screams of anger.

A referee–Mom or Dad–needs to step in before serious damage is done.

None of this lasts long. Issues exist, but no brother really holds a grudge. There’s too much fun to be had with one another. Within moments, the bros are back to playing, pretending to be dinosaurs and ravaging the countryside–and the kitchen–looking for things to eat.

Many don’t appreciate the reality of this, especially when it comes to the family of God. People see those who follow Jesus as hypocrites who can’t agree about anything. Whose constant disagreements have caused rifts in churches for centuries. 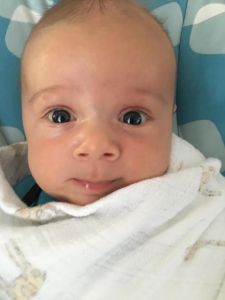 Can he be any cuter?

Back it up a bit. Family of God. Aren’t families, even the most visibly perfect, actually dysfunctional in some ways? Yes. And though we choose to follow Jesus, we’re still living imperfect lives in an imperfect world. And though we don’t agree on everything, one thing binds us together. Like the genetic code that binds families.

A spiritual genetic code, so to speak. The grace of God.

Watching the grands play together reminds me how much they truly love each other. They get on each other’s nerves, but what family doesn’t? Bros back each other up.

Those who follow Jesus, having received His grace and forgiveness, are as different from each other as any other people. What holds us together is Him. Not us. Not what we do or how well we do it. His love binds us together.

Family, this side of heaven, will always be a challenge.

In Jesus, we can overcome those differences in love.

Because He loves us first.