Make Mine With Whipped Cream

Coffee. Any dessert. Waffles. Tip of a finger. Straight from the can into an opened mouth.

It’s the ambrosia of those who won’t settle for Cool Whip.

My youngest was in town, and she’d hung out with my oldest daughter and her family at a science fair. When it was time for soccer and track practice, Heather and Deb headed to a coffee shop with the two youngest boys.

It was an experience waiting to happen. I met them there for the fun that would ensue.

Callum is two months old and could care less about solid food. He’s still getting his days and nights straight.

Ryken, on the other hand, knew exactly what he wanted. It wasn’t coffee.

When we were handed menus upon arrival, he saw the picture of a huge waffle with strawberries and whipped cream piled on top. A mountain of deliciousness.

Our waitress came back and asked for our order. Ryken could barely contain himself. “I want whipped cream with a waf…I want a waffle with whipped cream on top.” He refused the strawberries. Only the fluffy white. And lots of it.

A young woman of great wisdom, she came back with his waffle loaded with sweet whiteness.

And an extra container of it on the side.

His eyes almost as big as his plate, he picked up the extra container and took a big lick.

There was nowhere else his grin could go.

He ate all the white stuff and maybe half a waffle. Too much of a good thing filled him up.

We headed back to our house and little-guy basketball.

It’s a combination small hoop/soccer goal that lets him slam dunk while sitting down. He tossed a few balls in and found the toy talked to him as he made goals. So he sat next to it and lifted the ball through the hoop the ten times required for the recorded praise. No throwing required.

“I’m a star player,” he mimicked the toy.

“You’re cheating, Ryken. You’ve got to throw the ball.”

The repeated praise stoked his self-confidence as he kept lifting it up and down. Too many accolades with too little effort. Like the whipped cream, too much of a good thing. It got him cutting corners and 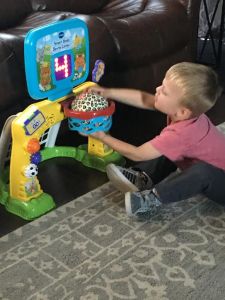 How many times do I have the prize in mind without caring how I achieve it? If the chances of getting caught are slim to none, it makes it easier to try and get away with it.

Trouble is, one time of getting away with something wrong makes it easier to make a bad choice next time. Justifying misguided decisions, no matter how good something looks or feels in the moment, sears our consciences and hearts.

I can’t do that on my own. I want to do what’s right, but I gravitate toward what’s easy and wrong. Trying to “be good” is frustrating because I can’t be consistent.

Jesus offers His grace and mercy to cover my weaknesses. With love.

That’s whipped cream and then some.