You Can’t Make This Stuff Up

When left to my own devices, with too much time on my hands and no real plan to pursue, I get reckless. Wasteful.

Seems the MO for most folks, no matter what age.

Ryken, at three, has discovered his imagination. And he pursues it with vigor–and absolutely no restraint.

His folks were gone and the older siblings were watching him. Both believed the other to have eyes on him.

Recognizing opportunity, he went into the pantry–a little room with a door that conveniently closes. He removed his pull-up and pooped on the floor. He poured canola oil and maple syrup into the pile, mixed well, and proceeded to paint the floor, walls and anything else he could reach with his hands.

When questioned why he’d pooped in the pantry and not the potty, his response was logical. “I wanted to mix it up.” Why not mix bodily excrement with food to make it more palatable? The painting part? Food, a Keurig coffee machine and various other things had to be disposed of because of poo in small places. 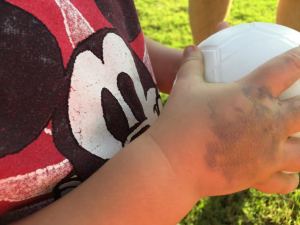 John and I later took the three youngest grands to a fall festival where I was tasked with running after Ryken. We stood in line three times for the hayride, which we never did, because he kept running into the inflatable corn maze. We did the maze once and filled a paper with fall stamps to earn a piece of candy, so he’d run back through and stamp his hands because he had no paper.

He really wanted to ride the hayride, but the line got longer and he refused to wait.

Peter and David, two gentlemen driving a cart around, picking up trash from the festival and dumping it in necessary places, were gracious enough to give Ryken a ride. I explained his dilemma, and they were happy to comply.

Better than the hayride. He rode in the trash cart.

It’s so easy for me to wander off course and do the things that seem great in the moment. Not being a poo mixer, I tend to err on the side of binge watching TV or eating way more chocolate than is humanly healthy. On the ugly side, I’ll not think of what I’m saying and be critical of someone, gossip because I’ve got news to share, or not tell the whole truth because I want to look good in the eyes of someone else.

Left to our own devices, with no moral compass, we do what’s right in our own eyes. What makes us feel good. Too often that doesn’t take anyone else’s feelings or needs into account.

Knowing Jesus has given me a path to follow that helps me focus on others rather than always thinking about what I want. He provides a way of absolute truth that makes sense because it makes me more aware of sharing this world with others whose needs are different and bigger than mine.

I certainly can’t make up something better.