Beautiful Unity For The Beautiful Game

It’s the end of baseball season, beginning of football and soon basketball will begin its forever run.

I love soccer. All six kids played, and the grands are now filling the ranks of those engaged in the beautiful game. 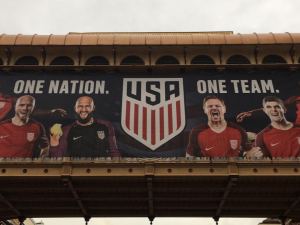 But we’re in now, and as with most things American, we go big or we go home.

Thanks to a traveling son-in-law, I had the chance to attend the game between the US and Panama. A World Cup qualifier where we pretty much needed to win to go on.

I’ve not seen many professional matches, so the thrill of spectacle is huge.

And there was spectacle.

We sat in the nosebleed section and had a great view of all that went on. Each chair in the stadium had a colored board that we were to hold up during the singing of the Star-Spangled Banner. Members of the military and others carried out a gigantic flag which was unfurled for our national anthem. The cards spelled out “One Nation, USA” around the stadium. Fireworks exploded and people cheered.

Unity in a country that’s been divided by so much confusion and pain. 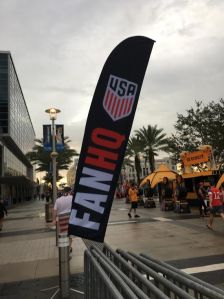 The tag line for our US men’s team is “One Nation, One Team.” Which is beautiful when you see the roster and recognize the diversity on it.

Fans showed support for both sides by wearing team jerseys, wrapping themselves in national flags and carrying all manner of things that reflected country loyalty.

What was even more impressive was the fan interaction.

There were different ethnicities, socio-economic backgrounds, political parties and genders represented. None of that made a difference. When we scored (which we did four times and won!), people high-fived others around them. Folks hugged, laughed, cheered, slapped each other on the back.

The camaraderie was electric. We jointly celebrated the win. Even those supporting Panama were good-naturedly joking with the US supporters.

All because we were fans of a game.

Yet none of our lives would be forever impacted by that game.

Our passions are fickle. Why can we agree over goals scored and yet fight tooth and nail over politics and beliefs?

We care about that which affects our lives day to day.

One nation. One team. But we don’t live life like a team.

We live demanding what we want. Not listening to others. Not seeing the worth of the person. When it comes to caring about what counts–people–we leave team and nation behind.

Jesus reminds us of the value of the individual. He taught us to love our neighbors and our enemies. To do good to those who treat us well and those who don’t. Unselfish compassion founded on a Savior who died for us all.

If we could selflessly care for others with the power Jesus offers, we could become one team.

That’s something to cheer about.

2 responses to “Beautiful Unity For The Beautiful Game”