It Doesn’t Cost To Say Thanks

With so much in the news lately of the military and first responders going above and beyond to help people powerfully affected by this hurricane and wildfire season, it’s been a great reminder of how those who serve our country do so at a high cost to themselves.

Often with very little gratitude from those they serve and protect.

I’m embarrassed to say how little I respond with gratitude for their work. They’ve done their jobs well. And selflessly.

Flying out of Reagan International Airport this week, I encountered a group of war veterans–World War II, the Korean War and Viet Nam–who were being flown to Washington D.C. to visit the memorials created in tribute to them. The announcement came over several times about these individuals coming in, encouraging those present to take the opportunity to thank them.

I was catching a flight to Chicago; I had things to do and places to go.

A large group was getting off several elevators in my path, hindering my progress. My immediate reaction was annoyance. Really? You wanna slow me down?

These were the veterans. Many in wheelchairs, some with walkers. All grinning and grateful to be there. They were joking back and forth, even though some were obviously not having as easy a time as others.

The emotion that flooded me was a sense of gratitude I hadn’t expected.

It was easier to snap pictures from a distance; I was afraid I’d break down and cry. I got the courage to walk up to a few, introduce myself, and get some pictures of these brave men and women who put it all on the line for our country. When I shook several hands and thanked them for their service, I could barely get the words out.

True gratitude is deeper than words. It’s a recognition of the good someone has offered me without expecting anything in return. Their gift of service comes from hearts wanting to help others. To acknowledge that is giving back.

I doubt any of these folks went into their jobs for all the affirmation they’d hoped to get. They don’t sacrifice life and limb for a 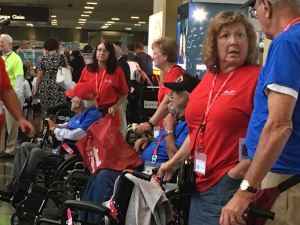 kind pat on the back.

They do it because they’re called to serve others.

We, as recipients of their courage, need to be grateful.

God encourages us to have a thankful heart. Not because life always works out the way we want it to, but because, if He’s in it with us, He will use it for our good.

In an age where it’s easy to criticize and complain, gratitude is something I can bring to daily living. To learn to be thankful for small things. To appreciate others that we encounter. To validate their gift and sacrifice.

When was the last time you thanked someone for their kindness to you?

It doesn’t cost a thing.