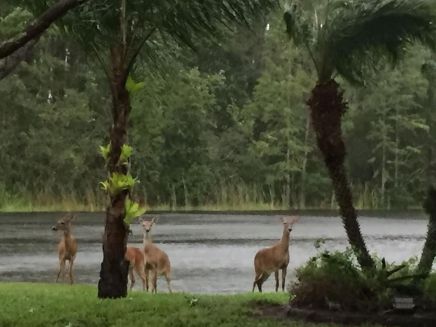 The deer that live behind us knew to come to where they’d always found food at our neighbors.

Irma has moved on. Leaving a large percentage of Florida and other states without power and shortages of gas, water and food. Water damage and fallen trees have made some homes uninhabitable.

The emotional toll is worse. People have died. Those who lost everything must start over.

Some folks refused to leave their homes. In the Keys, they’re not sure how many people survived, but they’re a hearty bunch down there, having bettered storms such as Donna, Andrew and now Irma.

When people refuse to play victim and won’t fold under adverse circumstances. they can face challenges with hope. Together. The 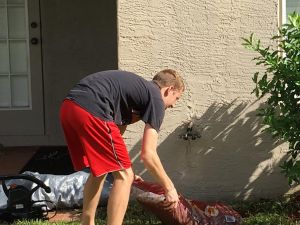 German philosopher Friedrich Nietzsche wrote in his book, Twilight of the Idols, “What does not kill me makes me stronger.” Crisis grows us. Even if we’re not aware of it.

We experienced a small amount of inconvenience and damage. Power was out for twelve hours. Water damage in three rooms. In light of what many experienced, we couldn’t complain. The heat and humidity and noise from the wind and rain were uncomfortable at best.

The pleasant surprise came after the hurricane.

Since neither John nor I are great planners, we hadn’t gotten sand bags to build a flood barrier to our back porch. The last minute, John bought large bags of mulch and dirt to use in place of sand. They worked to keep water off the porch.

After the winds and rain had passed, we cleaned up. All the branches and yard waste that blew off our trees were bagged and set on 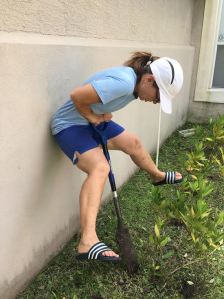 Then there were those bags.

We’ve needed to put fresh mulch on our plants for some time. Parts of our yard had cratered from rain washing away dirt. Holes needed to be filled.

What we hadn’t taken time to buy or do before was now available for us to use. Hadn’t even thought that one through.

We’ve also had these bushes in our front yard that have ridiculously long, tenacious roots that I’ve wanted to pull out for the past two years. The ground was never forgiving enough to let go of the roots. In their behalf, the roots put up a heck of a fight.

With the ground super saturated, I thought I’d give it a shot.

Even with really damp ground, it was a battle. Prying those bushes out of the ground took a team effort. Alone I could barely get the shovel in far enough to loosen their grip. Four of us worked together and managed to pull those resistant things from the ground.

That’s what we’re seeing with clean-up from Irma and Harvey. Team efforts. People not affected reaching out to help those that 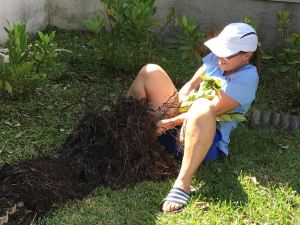 were. Alone we falter. Feel overwhelmed. It’s easier to give up when no one helps.

The silver lining is how crisis gets our eyes off our minutia to see the greater need of others.

This is our story now. Neighbors reaching out to help neighbors. Strangers sacrificing to help those in need. This isn’t political or philosophical. It’s need. The God who made each of us in His image gives us grace to reach out to those less fortunate.

Maybe what doesn’t kill us makes us kinder.