It’s All In The Genes 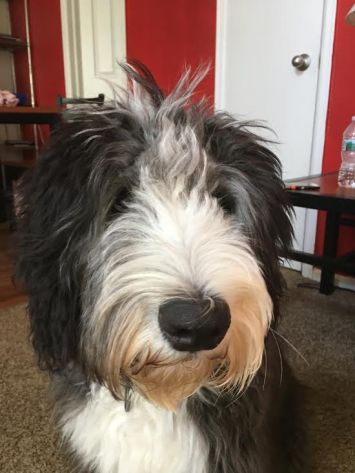 He looks and feels like a giant stuffed animal.

Looks can be deceiving.

Walter Waffles Wickberg, better known as Wally, is a six-month old sheepadoodle. An old English sheepdog mixed with the calm and smarts of a poodle, he belongs to our daughter, Courtney, and her husband, Michael.

He’s the child before the children actually come.

We’re in their territory, so they came for a visit–with Wally in tow..

He already looks like a small horse–this boy is going to be big. He’s a curious soul. 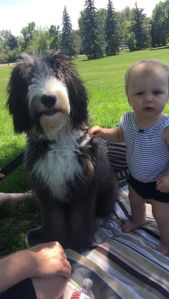 Checking things out. Wanting to see it all. He’s got a sweet disposition, learns quickly and is a lot of fun to be around.

One thing he can’t get away from. What he was bred to be.

He’s a herding dog. A four-legged shepherd. The instinct is there. He’s very alert to small people around him, watching them, aware of where they are. If they run, he senses they’re escaping. He’s after them like a shot, stopping them in their tracks.

Even if it means knocking their feet out from under them.

He’s quite good at what he does. When he saw Courtney and Michael embrace us as family, we became part of his responsibility. Especially the littles.

Sloane, at eleven months, is walking fairly steadily. When she  headed away from the crowd, he effectively blocked her. Yes, he knocked her down in the process. But he kept her from straying too far.

It’s fascinating to watch an animal who’s been bred for a certain function to act out of their strength. To respond as they were meant to respond. 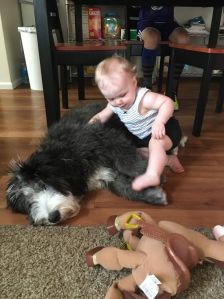 What sweet Wally hadn’t counted on was how those littles would focus on him.

We’d walked to a park for some play time. Wally was in his element. Bounding around like a toddler on sugar.

Always on the alert with the kids.

He never lost sight of Sloane.

When we got back to our apartment, everyone was tired. Wally just wanted to flop down and rest.

Sloane had other ideas. He became a very large stuffed animal. She climbed on him, splayed all over his back, stuck her hands in places he wasn’t prepared for. Treated him like an inanimate object.

He never made a sound. He took what she dished out with patience, casting an occasional longing look at Courtney and Michael.

Jesus is the Ultimate Shepherd. The One who never loses sight of where His own are. Who’s always alert to my needs, protecting 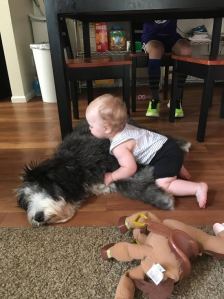 me from that which could destroy me. Patient and diligent.

I don’t always treat Him well. There are days when I ignore Him. Times when I compromise on the things He’s taught me. Times when I really don’t want to deal with His holiness because I’m feeling and acting quite the opposite.

The cross. When He took our punishment for us. The ultimate sacrifice by ultimate love.

Like watching Wally, it’s amazing seeing Jesus do what He came to do. Saving the broken and downhearted–me. Lavishly pouring out grace when I don’t deserve it.

Appearances can be deceiving.

Who He is and what He can do in our lives is worth pursuing.