Even the kids are Tebowing.

This past Saturday, John took part in the Better Man Event in Orlando. An encouragement for men–old and young–to become more of whom they were created to be. An opportunity to be around those guys that define manliness.

Translated–Guys that do sports and magic.

Women are created differently. We may be equal in some areas, but I don’t know many women who are as drawn to all sports and sports figures as are many men. We may enjoy sports, but we enjoy other things as well.

If someone wants to draw men to an event, a sure bet is to invite athletes to speak. Add a master illusionist to fill any entertainment gaps. 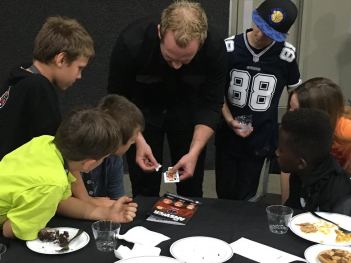 Tim Tebow was the keynote speaker. A Florida Gator and darling of much of the southeast, he’s played with a variety of pro teams and is now playing for the Mets. Trying out baseball. Nothing like a multi-faceted sports guy.

Jim Munroe, a popular illusionist known as the Maze, added the wow factor of tricks that defied imagination. If anyone can pull anything out of a hat other than a sweaty hatband, I’m thoroughly impressed.

To round it out, Tim Johnson, a Super Bowl champion with the Washington Redskins, now pastor, also spoke.

John and some of his friends had the chance to take their sons and grandsons to this event. All of whom were quite delighted with the lineup.

Sit too close he may talk to you!

It’s part of human nature to be somewhat starstruck by the rich and famous. They have lifestyles different from ours. They drive better cars. Eat at the great restaurants. Update their wardrobes with regularity.

And people know them. They scream their names. Ask for autographs. Take selfies with them. Or ask strangers to snap a photo while they stand chummily close.

Does being close to greatness make us great?

There are lots of people I’d not want my kids or grandkids to fawn over. To make into heroes. Those who are self-obsessed, lacking in character, flaunt their status, or live lives I wouldn’t want to see replicated in my kids–not my kind of heroes.

These guys were different. They had a common thread running through these lives.

All of them know Jesus.

Tim Johnson led Penn State to a national championship, as did Tim Tebow with the University of Florida. Both were known for the character on the field and off the field. People might not have agreed with their faith, but they couldn’t find fault with how they treated others.

Jim Munroe was a skeptic. Fascinated by the supernatural and magic, he became one of the top magicians in the world. Juxtaposing truth and illusion, truth and doubt, became his passion and quest. Everything was working for him–till he got a diagnosis of terminal leukemia. He got a bone marrow transplant and experienced a medical and philosophical miracle. He’d found truth in Jesus.

These men have been masters at their crafts. They work diligently to do their best in everything. Not because they want to impress the crowds.

They do it out of love for their Lord.

Those are heroes worth having.