There’s An Elephant In The Room–And It’s White

‘Tis the season to give gifts.

Which assumes a desire on the part of the giver, that there’s a relationship with the receiver. Connection. The joy of giving.

Often we end up with obligatory giving, which ends up being costly and not very satisfying.

One of the more popular forms of giving has become the white elephant gift exchange. Gift-giving with a giggle. For the uninitiated,  it can be a bit confusing. Where many see it as gifting your trash and hoping it becomes someone else’s treasure, those from other cultures often wonder if finding little elephants to give is what this is all about.

We’ve been to three white elephant parties in less than a week. We’ve scoured the house for things we don’t want but that don’t appear truly trashy. Something someone might actually appreciate. Or at least something that will bring a lot of laughter and goofy comments.

Going through the garage was discouraging. All the things I wanted to give away were too big or too inappropriate. A wooden table missing a couple of legs. Old paint cans partially full of dried paint. Automatic trash cans that no longer work.

Junk. Why we still have this stuff is anyone’s guess.

We went through John’s office. He has a plethora of paraphernalia that he’s acquired that was begging to be given away. Old books of which we have multiple copies. Miniature travel kits from his many overseas flights. CDs that we haven’t listened to in years, some of which have never been opened.

More junk. Have we never thought to declutter?

The goofy gift exchanges take the pressure off a financial burden I often feel at Christmas. The fun has been in seeing what I have chosen, for whatever odd reason, to hang on to. Giving it so someone else can store it seems to make more sense than pitching it myself.

It’s a gift-giving option minus the stress. People get tired of spending money on gifts others don’t necessarily want and yet they feel obligated to buy. Guilt over money spent is underlined by resentment that the money had to be spent at all.

We wonder why Christmas can be stressful.

The wonderful reality of Christmas isn’t just in giving gifts, as the Magi did to Jesus. It’s receiving the greatest Gift that could be given. It’s a declaration of love that we all need to hear, to consider. The God who made us wanted to restore the broken relationship between Him and us, and as an act of love, He sent His very best to us. To live among us. To show us God.

A Gift that was fully unwrapped 33 years later on a cross. When Jesus died for the wrongs He never did to make us right with God.

The best possible Gift. One completely undeserved and yet so lovingly given. Priceless.

God doesn’t give junk. He wasn’t obligated to give us anything. His world, His plan, His rules.

He chose to give His best. Out of love for us.

He waits to see if we’ll choose to receive it. 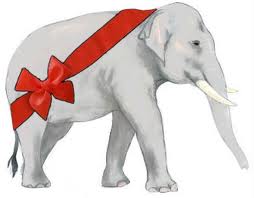