When The Big Boys Sleep Over

With six kids, we’ve had our share of sleepovers.

Typically accessorized with lots of unhealthy food, late night games, weird movies, frozen underwear, and everyone sleeping on the floor in the family room.

When you get older, a few things change. Not as many as I would’ve thought.

John had three of his special out-of-state friends for the weekend, and to be fair, I needed to vacate the premises. That little bit of estrogen throws the whole testosterone flow out of sync. Debbie and I bunked with my daughter and her family and let the guys have the house.

These four amigos have been getting together for a yearly retreat for quite awhile. In the past they’ve gone to Wisconsin, where temperatures are already dropping dramatically. They thought Florida and sunshine would be a lovely alternative. With five bedrooms and usually no one living at home, we’ve got the space. And our back yard is spectacular for its size and view.

Debbie has moved home temporarily in preparation for her move to North Carolina. Melody had offered our home to three of her friends for the week while in town for a conference. She and Sloane were there as well.

We had a one-day-crazy-turnover that everyone survived. It meant Debbie and I stayed one night with the guys in the house.

I walked around with a huge grin on my face for 24 hours.

Being around people who feel so comfortable with one another is a gift. The humor is pure fun. The snark flowed freely, but not hurtful or sarcastic. These guys truly care for one another.

They’re older, so staying up late was off the table. They became prehistoric carnivores for a weekend, watched sports and enjoyed being together.

I rarely see John so relaxed. He actually giggled–can’t tell you how many times I’ve ever heard that.

These men have shared the hard stuff of life together. They’ve each gone through huge challenges, and they’ve learned to trust each other. No fear or shame, contempt or rejection.  They hold each other accountable and encourage one another in the battles of life.

They’re prayer warriors for each other. The Bible is their instruction manual.

They balance serious and fun, knowing that to genuinely share the hard stuff they must value one another in all areas.

It’s been a rough several months for my husband. He’s an introvert by nature, and often, at the end of the day, he’s out of words, out of gas, out of capacity to connect.

This was a gift. A chance to be himself with people who really know him. Safe.

We all need that. God made us for relationship, not just with Him, but with other people. The problem is, in this age of social media where everyone is managing their images, knowing the truth of people is rather like playing poker. Unless you’re assured of winning, you don’t have to show your hand at all.

These men have shared their stories unashamedly with one another. Not always pretty. But then, the best stories are filled with ups and downs, intrigue and problems, villains and heroes.

Who really knows your story? 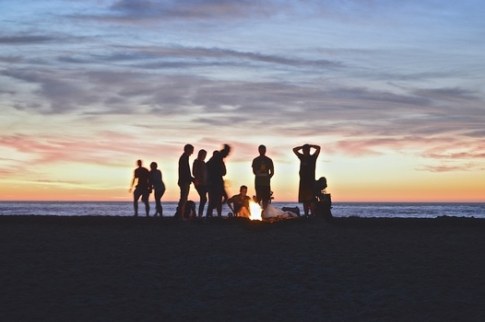 One response to “When The Big Boys Sleep Over”