He prefers jumping to standing still. Throwing to holding. Ignoring to listening.

He loves “boonies” (balloons) because they’re soft and bouncy.

He’s clueless as to why he does anything.

Two-year-old Ryken, with increased verbosity, has a stock answer anytime he’s questioned about his actions. 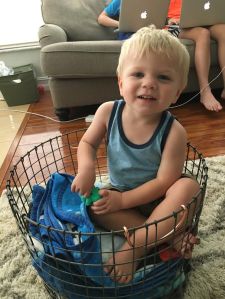 “I dunno.” Usually followed by a shoulder roll or raised hands. Or both. All indicating innocence, lack of experience and wisdom and the general “Don’t hold me accountable. I’m two.”

He wins everyone over with his sweet smile, huge blue eyes and mop of blond hair. Which will work for him for another couple of years.

His four siblings think it’s cute. They’ll acknowledge his foibles and ask why he’s doing whatever he’s doing. They laugh when he quips, “I dunno.”

Unless what he’s throwing belongs to one of them. Or what he’s jumping on is one of them. Tolerance and humor then move to frustration and anger. Cuteness doesn’t cover broken toys, ripped books or a sore stomach.

Our home is not kid-proofed as it used to be. I should be careful of what I leave out when the grands are over. I don’t think about it.

I have a coffee center with a display of Starbucks mugs from around the world. Some given as gifts; some collected as John and I have had the chance to travel. Ryken is fascinated by the mugs.

It wasn’t mean-spirited. It was gravity. It was there. He picked it up. And dropped it. Ceramic meeting tile always results in one outcome. Shattering.

He can learn not to touch. Children are trainable.

At two, they’re also prone to orneriness. Colorful mugs are calling to be touched and picked up. And dropped.

It’s easier to tolerate Ryken’s actions and try to waylay him when his interest strays to breakable things.  Uncomfortable and inconvenient things. As Nana, I can laugh at his escapades, forgive occasional faux pas, whine about it later. I don’t need to train him in all appropriate behaviors. I’m the fun Nana. I can enjoy him and all the grands–and send them home to their parents.

It’s tolerance. When did I abdicate to convenience?

We live in a world that strives to tolerate everything because no one wants to hurt anyone’s feelings. If I stand up for something that’s right and true, I’m labeled as intolerant and close-minded because I’m not letting people be who they are.

I’m going to anger a lot of folks by making this statement, but here it is:

I believe in absolute truth. And that truth comes from an absolutely perfect God. Who chooses to love us and engage us in life.

I used to think all people could agree on a few basic things. Integrity. The value of life. Treating others with kindness. Recognizing we share a world with a variety of people who don’t think or act like we do.

That’s not how it is. Frankly, it’s not how it’s ever been. Brokenness has existed since the beginning of time.

Does that mean we don’t speak up when someone is wrong, when others are being hurt unjustly? Do we just say, “That’s how they do it.”?

I dunno. You tell me.