Does This Dress Make Me Look Judgemental?

“Not until you go back into the house and change those shorts. I’m not going out in public with you dressed like that.”

A conversation many parents have with their children. Kids dressing themselves often turn out looking a bit inappropriate with their choices, whether it be something worn for a week so it can stand by itself in a corner, something too small or too fancy for an occasion.

This wasn’t me talking to one of my kids. It was my daughter locking me out of the car, refusing to drive with me until I changed 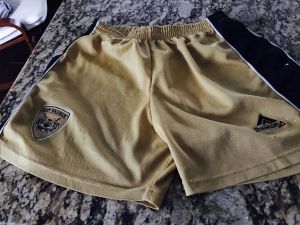 out of the pair of soccer shorts I was wearing.

The shorts were clean–I’d washed them a few days before. There was nothing indecent about them–they came almost to my knee and were a little baggy. The way I like them.

The problem stemmed from the presumed hideousness of the shorts. They were about fourteen years old and had been worn by one of my daughters during a soccer season.

And another daughter during a painting day.

Deb was behind the wheel and found it inconceivable that I’d choose to wear such stretched-out, old, stained shorts in public. The fact that it was merely the grocery store made no difference. Being one of those young people who dress more for success than comfort, she looked quite lovely in jeans and a trendy shirt.

I just don’t care that much.

Let me rephrase that. I do care about appearances. People do tend to make first impressions from how a person looks upon meeting them. If you dress like a slob, the chances are they’ll think you act like a slob.

I get that. But this was the grocery store, people. Not the mall.

I don’t enjoy shopping for clothes either. I hate the trying on of, the deciding about and the ultimate expenditure of funds to make it a worthwhile expedition.

I’m told I’m hiding when I choose to dress this way. That I don’t want to be noticed.

Maybe. It doesn’t change the fact that I don’t want to be judged for what I look like, but who I am.

Yet I judge others by how they look. How they’ve chosen to show up.

Getting to know people takes time and energy. Making snap judgments based on what I see rarely gives a person credit for who they truly are. It’s a snapshot of a moment in their lives with no understanding of the circumstances that led them to look the way they do.

Lack of money? Bad day? No time for laundry? Kids got sick all over what they’d first put on?

Jesus didn’t judge people by how they looked. The religious leaders were all about the appropriateness of their robes and accessories. He called them phonies because they cared more for the outside than the inside.

He cares about our hearts. What we’re really like when no one is looking. How we choose to show up when we thing we’re alone.

It’s not clothes that make the person. It’s the heart of the person that makes them who they are.

The fashion industry would hate me for that.