The Beautiful Game–More Or Much Less

Isley has wanted to be a soccer player for awhile.

Number four of five children, she’s seen her three older siblings don uniforms, head to the pitch, and engage in 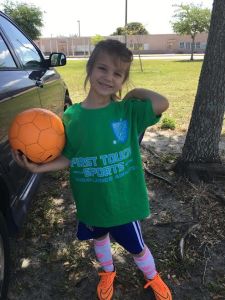 Being an uninvolved observer, she’s been wondering when it would be her turn to play. To have a chance to show her awesome skills.

And finally get her own uniform.

Going to Isley’s game was nothing short of an entertainment bonanza. These four and five-year-olds have a ton of enthusiasm.

The concept of the game is quite simple. One team gets the ball into the goal of the opposite team using only their feet to move the ball.

The kids got this much. They did everything in their power to get that ball into the other goal. 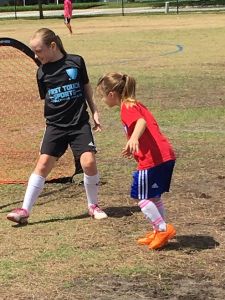 At halftime, their two coaches talked with the kids about being on the same team and working together. How it didn’t help to take the ball away from their own player because the idea was to score as a team. Cooperation.

A bit of a challenge when everyone wanted to be the one to score a goal.

Kids were tackling their own players to get the ball. Knocking them out of the way with a random shove. Inadvertently tripping their own teammates.

It was hilarious. Like watching a rerun of “I Love Lucy“. Where great intentions devolved into chaos. At one point one of the players walked off the field to pet a dog. While the game was in progress. Another walked off and sat on his mom’s lap.

During one of her turns on the sideline, Isley and her friend, Jack, were digging holes by the field. They were 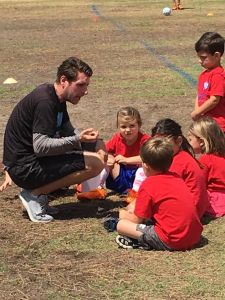 You can’t make this stuff up.

I have no clue what the score was at the end. Someone won.

They walked away thrilled. Candy was involved.

Watching little kids learn a sport is fun. And funny. Their worlds are still small. They believe they’re at the center. Much of what they learn helps them feel better about who they are. Cooperation and sharing come a little slower. A little later.

As an adult, I can have the same attitude as Isley. I need to score big to be appreciated. I have to win to be recognized.

Being a team player is hard.

I share this world with a whole lot of people who don’t think or act like I do. Learning to live together, cooperating, should make it easier for all of us.

Jesus called us as His followers to love others as He loves us. Unselfishly. Sacrificially. Genuinely. Make the choice to cooperate.

God–the perfect, ideal Coach who can teach us how to do life well and give us the power to do it.

Am I just about the goals I score?

Being a team player is hard.

Not being alone on the playing field when faced with tough competition?

10 responses to “The Beautiful Game–More Or Much Less”