Santa Will Come To Town–For A Price

I was pushing–shoving, actually–to make this happen. I was willing to do it alone.

We’ve had Ryken and Isley for the weekend. Four days, three nights of non-stop motion.

John wanted to stay at home, relax. Let the kids veg out on videos. Easy. 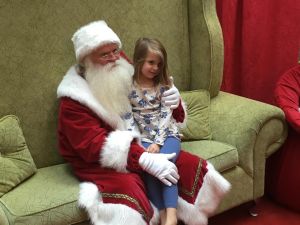 That didn’t sound fun at all.

I wanted to take the kids to see Santa.

Five days before Christmas, and all I wanted to do was take these two to the biggest mall in central Florida. To fight not just the crowds of locals, but the many tourists–especially internationals–that are drawn to this place.

I guilted him into going. I think he feared for the kids’ safety and my sanity should I attempt this alone. Florida Mall can seem overwhelming. Not John’s favorite place in the world.

He might rank it right up there with his gall bladder surgery. 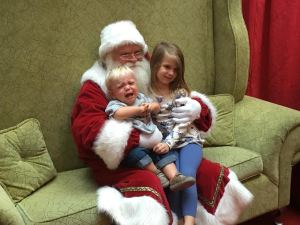 When we arrived, there was already quite a line to see Santa. We could see more folks moving in that direction, so we hurried over. To wait.

Which was when I discovered that this wasn’t the Santa Claus I remembered as a child.

What used to be a holiday tradition of maintaining the whimsy and magical persona of the jolly red-suited gentleman had become a paying proposition.

Santa was now in it for the money.

As we stood in line, a worker passed out envelopes with a list of options of picture packages to purchase. Signs were posted in several places that asked people not to take pictures with cameras or cell phones unless they purchased a package.

I suppose it was possible to stand in line and let your child sit on Santa’s lap with no visual proof it happened.

I didn’t see anyone do that.

We waited in line an hour. No child told Santa what they wanted. He didn’t really speak much at all. This was a pure photo op.

Ryken hated every minute of it. Isley was in her glory. 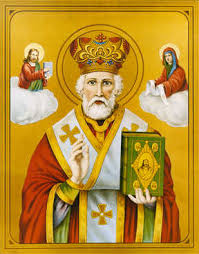 Because my parents didn’t tell us for years the truth about Santa, I determined to never let my kids be confused about the truth of Christmas. We told them all about the legend of Santa–St. Nicholas was a real man. Born in 270 AD in Patara, which is now on the southern coast of Turkey, Nicholas’ wealthy parents raised him as a devoted follower of Jesus. They both died of an epidemic while he was still young. Because of his faith, he used his entire inheritance to help those who were hurting and needy around him. He eventually became a bishop in the church, but was imprisoned for his faith–as many were back then.

The whole tradition of Santa stemmed from a faithful heart, from one who gave freely to others from what he’d been given.

Kind of reminds me of the real Christmas story. The birth of Messiah, who came to give us life.

The commercial stuff? It’s Christmas quicksand that can suck the very life out of you. Make you forget why you’d ever want to celebrate this holiday.

Jesus? No fairy tale there. A gift of life that we can’t earn and don’t deserve.

You can’t buy that kind of hope and peace. Anywhere.