The Culture Of The Playground

I’ve had the privilege of spending much of this past weekend at soccer games. This new generation of family players is exciting to watch and full of potential.

Frankly, I’ve grown up a little and don’t feel the need as deeply to scream at unfair referees and their poor calls. I just think those thoughts. And smile benignly at those other poor souls who are screaming.

I was like them. But wisdom has come with age.

That and having John stand as far from me as he could because my yelling embarrassed him. 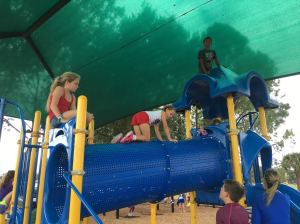 At several of the fields they had great playgrounds. Those were built by brilliant people who understand soccer to be a family sport, where all the siblings are hauled from one game to another to enjoy family fun days. For the non-soccer or pre-soccer sibling, a playground is a gift of grace. They feel valued. Someone out there knows that a few find soccer boring.

I spent time with Ryken and Isley at the playgrounds. What a lesson in human interaction.

Isley is an extrovert with no guile. She walked up to folks and introduced herself, asking if they wanted to play with her. She didn’t care who she played with. Age, gender, size, ethnicity didn’t phase her a bit. A friend was a friend. She treated them all the same. At one playground, she was playing with three young African American boys, all taller than her. After looking at her quizzically for a moment, they invited her into their game of tag. Even slowing down a bit to let her catch them.

At another park, Ryken was climbing up a slide with his one-year-old bear crawl. (Yes, I was climbing with him.) A little Latina came up and started talking to him, and he grinned like it was his first dance. She helped him up the slide. And then back down again. 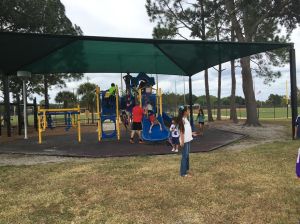 There’s something about play that levels the field of life. Having fun with others doesn’t require a degree, a lineage or a home in the ‘burbs. It’s being with people who are like-minded in wanting to have a good time.

At one park, adults were swinging, and the kids were waiting to get on. With good-natured comments about hogging air time. I went down a slide with Ryken, much to the delight of two little girls who were Middle Eastern. Their giggles were delightful. They came up to Ryken and told him how beautiful he was.

I believe he blushed.

What astounded me was how well it worked. No one was ignored. Or left out. Everyone who wanted to be a part of the games was included.

When in the growing up process did we forget how to get along with others? Valuing others, even if they were different?

When God made each of us, He made us in His image. All of us. He embraces all our multi-cultural, multi-ethnic, multi-lingual selves in who He is. We all have His fingerprints on our lives.

His creation of each of us levels the playing field, too. He is what we all have in common–whether we believe it or not.

We could all use a playground refresher course.