The Up Side Of Perceived Collateral Damage

The house looks a bit like a tornado struck.

Heather and her five kids are here for a few days while the husband and son-in-law are out of town.

It’s the sleepover that doesn’t end. Most expectations have been trashed for a bit because this isn’t anyone’s normal.

It’s an extended field trip to wherever suits our fancy. We’ve been to the humane society to pick out the perfect pet for five

rambunctious kids. (Jeremy is scared spitless thinking this may actually happen. It’s how I got all our dogs–while John was out of town.) Disney Springs is on the docket for later in the week. Parks. Library. Places Heather and I don’t go on a normal week because there is no time or energy.

There’s still no energy, but we’re taking the time.

Ryken, at 1, moves faster than expected. He’s quite the explorer, and I’m convinced Everest is in his future. He’s mastered our stairs, quickly flipping his squatty body to slide downstairs on his tummy.

Isley moves to the beat of her own drummer. At 5, bling is her friend. She’s got new shoes and a purse with sparkle and glitter. Our house now reflects the same. She knows no strangers

and makes friends with everyone she meets. An ambassador. Or political princess.

Teagan has more words than I do, which is no small feat. He talks constantly and loudly. And tells the best stories and jokes, made even more enjoyable because he laughs at them before he finishes the punchline. He’s got a future in entertainment.

Sydney is the gentle and determined one. She’s always willing to patiently help with the younger ones and reads voraciously. Her knowledge of animals always amazes me. She’s like Bindy Irwin with her enjoyment of critters. Future veterinarian.

Ethan is the oldest and has more ideas in a day than I do in a month. His ability to outthink me is humbling. His rationale is often spot on. A lawyer in the making.

It’s easy for me to fall into routine with life. When new opportunities arise to switch it up, it changes how I do life. Giving grace and space for others to be 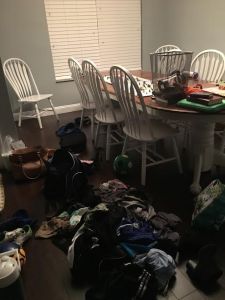 themselves, even if that grace invades my space, is a process that ebbs and flows with my attitude.

My attitude can be a forming tornado.

The Bible’s take is clearly focused on how I need to treat others.

“Don’t be selfish; don’t try to impress others. Be humble, thinking of others as better than yourselves.”   Philippians 2:3

It’s so easy to think about me and what I need. Want. Considering the needs of others means choosing to put my needs aside. Choosing to care for someone else and their needs.

I’m learning that being humble isn’t a martyr attitude that says I’m nothing. It’s a choice to see and value someone else for who they really are. Choosing to defer to them. Not worrying that I’m not being recognized.

Not comfortable or automatic. Not easy or convenient. But I want to choose to make a difference in my world by truly valuing others. As God does.

Which will bring the tornadoes.

14 responses to “The Up Side Of Perceived Collateral Damage”