They’ve been coming in from all over the country.

The sheep are returning to the flock. The kids are coming home. 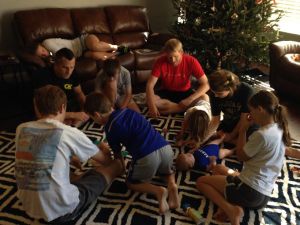 We haven’t all been together in over a year. But every other year at Christmas, they come back. Like a pilgrimage. Six kids, five spouses, six grandkids–we fill the house quite nicely. Their coming together raises the noise and thrill level exponentially. All of them are fun lovers. All enjoy playing games. Loudly and with lots of laughter.

So we play games. Lots of games. Often I’ll pause, just to take it in. They make me smile. They delight my heart.

The other night we played this new game. Rollick. Charades in teams, where several are acting out a difficult word or phrase together. Without talking about how they can do it. Working without a plan. Without a leader giving direction.

You can see where this is going.

I was on a team with a couple of my girls playing a team made of sons-in-law and another daughter. As the game began, I sat in amazement at how the other team seemed to intuit how to cooperate with each other in pantomiming actions. They made it look easy. I thought, “No problem. I’m a bit of a ham. I can do this.” 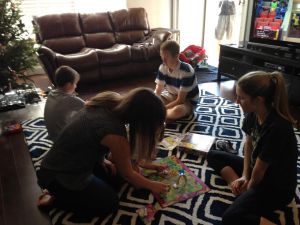 Which only made it funnier.

Laughing felt good. Laughing at myself was freeing and fun.

That, in a word, is the Christmas story. Delight. God loving us, His creation, so much that He didn’t want us to stay separate from Him. His purity and perfection made a relationship impossible with our messed up selves. So He sent the only One who could restore that relationship. His Son. Born to be a sacrifice. For us.

Because He delights in us. And wants each of us to know that.

That’s the simple beauty of Christmas. Being rescued by the One who delights in me. By the One He sent who loves me enough to die in my place.

As I’ve spent time with my family–a gift of incredible value–I’m getting a taste of what joy God has in being with those He loves. Being in their presence. Enjoying their interactions. Listening to their hearts. It’s a glimpse into the heart of the Father. That He delights in me just because I’m His. And it’s His deepest desire that we’d all be in relationship with Him.

This Christmas, ask yourself: Who truly delights in you?