What Are You “Playing” For?

If you haven’t been following the World Cup from Brazil, Germany came out on top of the heap. They’re the big dogs for now. It wasn’t pretty. After destroying Brazil 7-1, it took until the 113th minute for them to prove to Argentina they were the better team.

This time around. In this game.

I watched as they panned the crowd, showing Argentines crying, sobbing, as their team came up short.

Not by a lot. It was close. At any moment, the outcome could have been different.

We had family over to watch the final.

No strong ties to either country. My mom’s family is all German, so that seemed reason enough to cheer for them.

And my kids, all of whom have played soccer, love Lionel Messi. Argentina’s Little Magician.

Me? I love a good game. And typically side with the underdog.

When the game was done, amidst a lot of laughter and kidding, a question was asked that no one really answered.

“With the World Cup over, what’s next?”

Great question. We’ve been watching soccer for six weeks. Catching games when we could. Following highlights on ESPN. 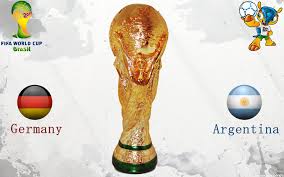 The world has been focused on a once-every-four-year event for a month and a half. Twenty-two men on a field, playing full out for at least two 45-minute halves.

For a gold trophy that isn’t particularly pretty.

Watching the faces in the crowds run the gamut of ecstasy and despair made it seem like they were more invested in the game than mere spectators.

But now that it’s over, what’s next?

It’s easy for me to live in the big, fun, every-so-often experience. To focus on the one thing that captures my attention now.

Which leaves a lot of life in between.

How am I living that life? How am I investing the time that I have today? What captures my attention daily? And involves my heart continuously? Am I merely a spectator waiting for the next big thing to begin? Or am I willing to get out on the field and be part of what’s happening?

If I’m to live fully engaged daily in life, with all it’s ups and downs, it needs to be meaningful.

In Jesus, I found that purpose.

“Work willingly at whatever you do, as though you were working for the Lord rather than for people. Remember that the Lord will give you an inheritance as your reward, and that the Master you are serving is Christ.”                   Colossians 3:23-24

If I do everything as if I were doing it for Jesus, I’d do it with more excellence. Doing my best no matter what the cost. Because the repercussions of my efforts would be eternal.

Not just the next big thing. Nor the big game.

And I’d be doing it for something a lot better than a funny looking gold trophy.

4 responses to “What Are You “Playing” For?”