Chocolate has played a huge role in my life.

If I’m going to obsess about a food and try really hard not to eat it, it’s the one I can’t get out of my mind.

If I’m going binge on something, it’s right there with me.

It doesn’t ask anything of me. It doesn’t judge me for the way I treat it. It’s just there. Waiting.

Needless to say, I’ve made my share of brownies. None of the boxed stuff for me–homemade, chocolate-laden, rich, dense brownies. 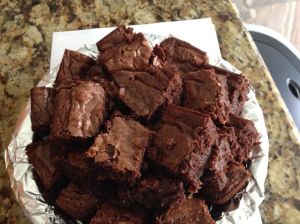 I make a mean brownie. I don’t fudge on the good stuff.

I made a pan the other night. Because I wanted to. I made the excuse that I’d give them to my husband to take to his group of buddies. Guys who have a huge appreciation for chocolate. Some of them have been known to say my brownies are better than–well, you fill in the blank.

But the truth is I wanted a nibble. Not a lot. Just a little.

Brownies, once made, will not be denied.

I cut them and placed them on a plate so John could take them at his convenience.

But I didn’t put them all on the plate. I left a few in the pan.

And judiciously cut a thin sliver off the ends of each.

They needed to be tasted. To make sure they were good enough. 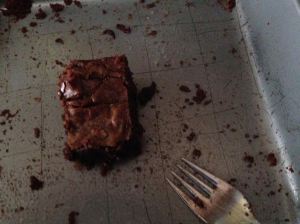 I put a few more back in the pan, and thin slivers came off them as well. Who would know they were smaller than intended? Gratitude at receiving my brownies would have masked any disappointment in size.

Do you realize you can cut thin slivers off an entire pan of brownies? And can still say you never ate a whole one?

The funny thing is, I didn’t start feeling guilty till a little later. When my stomach hurt from the ridiculous amount of chocolate and sugar I’d eaten.

I’ve found in life, there are times when I fudge in my actions and thoughts. Cutting corners just a little. Who would know? A little white lie. A little exaggeration of my efforts. Justifying my actions with passion rather than truth.

Those actions may not affect me immediately. And I may be able to go on for quite some time before anything causes consequences.

But my heart grows heavier. And it gets easier and easier to fudge.

God understands that about me. That my tendency to do wrong things comes a lot easier than my desire to do what’s right. But that’s why He chose to offer His Son in our place. Jesus paid the penalty for all my wrongdoings. Big and little. He loves me enough to intervene on my behalf.

“Lord, if You kept a record of our sins, who O Lord could ever survive? But You offer forgiveness, that we might learn to fear You.”   Psalms 130:3-4

It’s not being afraid of God. It’s being awed by what He has done for me. In love.

I face those sin traps every day. There are times I make right choices; there are more times when I don’t.

But because of my relationship with Jesus, I’m fully forgiven. Always.

There’s not enough chocolate in the world that could be better than that.

2 responses to “When Chocolate Comes Calling”