Do You Really Want To Play With Matches?

I remember as a little girl having a fascination with fire. Back in the day–even in the ‘burbs of Chicago–we were able to burn paper waste behind our house. We had a cement slab with a huge metal container that held the ash residue that we often used for our own experiments. And for ash finger painting. 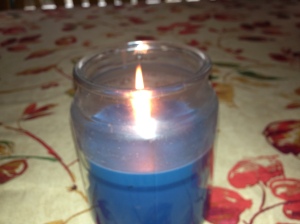 Fire has so many attractions.

My twin sister and I used to draw straws as to who would get to light the fire. If she won, I’d often barter with her to let me do it. Kind soul that she was, she’d often let me be the fire starter. I don’t think she was quite the pyromaniac I was.

Fast forward a lifetime. I walked in the house one day and smelled something horrible burning.

I entered the kitchen to find my youngest daughter, Debbie, a senior in high school, standing at the sink. Burning plastic forks. One tine at a time.

Seems she was bored. She’d gotten home from school earlier than expected. She couldn’t practice soccer because of a torn ACL, There was a plastic cup filled with plastic forks left from a gathering the night before. Obviously, they seemed to be begging to be burned.

A fascination with fire, it appears, is a genetic predisposition.

I know this to be true because my grandkids are all awed by fire. We lit the candles on their dad’s birthday cake recently, and all of them wanted to try doing it on their own.

Fire captivates our attention because of its power and destructive capabilities. It can warm a house and burn it to the ground. It provides light to see–candles are huge here in hurricane-prone Florida–and it can light up the sky with devastation, as it did this summer, when flames leapt from branch to branch in innumerable forest fires. 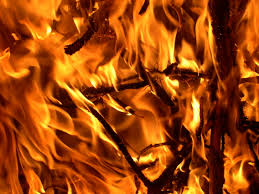 That fire can be useful or fearsome makes it intriguing.

We’ve lived in several places where forest fires have been an issue. Destruction and loss was all I ever saw. But a few years ago I learned of pine trees that actually require heat to reproduce. Bristlecone, Monterey and Pond pine trees have resin covered cones. It takes the heat of a fire to melt the resin so the cones can pop open and release the seeds. Those seeds don’t burn in the fire.

It takes heat and loss for some things to have life.

I’m a lot like those pine cones. There’s stuff in me that God is trying to develop, and too often it’s sealed inside by my own pride and arrogance. By me thinking that I know what I’m doing. God tries to be gentle, but sometimes He needs to turn up the heat so that my heart will open with my need for Him. Enough for me to become a clearer reflection of Him.

God uses His refiner’s fire to create His new life in me. That’s what makes fire fascinating. I know what it’s capable of accomplishing.

The question is: Can I handle His heat?

The second photo is courtesy of commons.wikimedia.org.