Soccer has been a huge part of our family. All six kids have played. And now the grandkids have jumped into the fray.

Even Isley is learning the beautiful game at Soccer Tots.

Debbie, our youngest, is still immersed in college soccer, playing for Lee University.

For those of you mired in D1 sports, this may mean nothing. But to those who understand challenging, on-going rivalries, whatever the level, a win is a sweet thing. 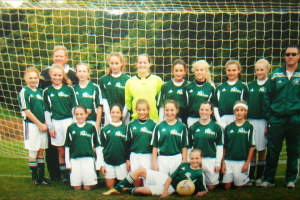 Especially if it’s on enemy turf.

Such was the case this past week when Lee triumphed over Lindsey Wilson, the current NAIA national soccer champions. A hard-fought encounter ending in a 2-1 win for Lee in the last few minutes of the game.

And both goals were with the assist of my daughter’s talented feet.

Her coach wrote her up in their recap, praising her for her playing, her mental and physical toughness, her unwillingness to let up.

Am I a proud mama? You bet. This is celebrating at it’s best. She’s a talented player who has loved the game since she began at the age of 5.

It would be easy to look at this and see another accolade in a well-played career.

Deb’s experience in soccer the last four years has been anything but satisfying. Her senior year of high school, when her talent was developed to the point where she was hoping to shine, she tore her ACL at the beginning of the season.  She already had a soccer scholarship, but when she went to college, with a leg brace her doctor insisted she wear, she was sidelined by a coach who didn’t think she could perform adequately with the brace. The next two years were no better, as her coach doubted her proficiency and wouldn’t give her a chance to prove herself.

She just wanted to show what she could do. What she was passionate about. To use the talent she’d been given.

She didn’t get the chance. 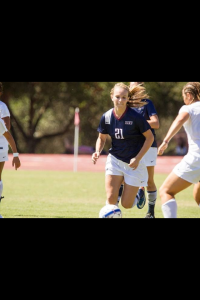 I was so proud of her resilience, her refusal to quit. To not become bitter.

There are so many times in my life when I want to be recognized for what I can do. What I’m capable of bringing to the      table. But the opportunities just aren’t there.  I see others having the chances I crave, and I wonder.

What’s wrong with me? When will my turn come?

And I’m reminded of what I tell my kids all the time.

That rarely satisfies my heart.

But Jesus reminds me that as tough as it gets, it won’t be too much. That with Him in my life, I may be ignored or    frustrated or overlooked. But not taken out of the game.

“We are hard pressed on every side, but not crushed; perplexed, but not in despair; persecuted, but not abandoned; struck down, but not destroyed.”  2 Corinthians 4:8-9.

Entitlement is an enemy I fight constantly. Thinking I deserve something I don’t. Wanting life to go my way. Crabbing about the hard stuff.

But hard stuff will happen. And I’d rather not handle it alone.

And I don’t have to.

That truth is worth the time to kick back and consider.