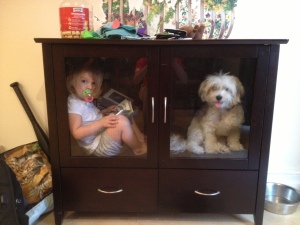 Why do kids love to play hide and seek? It’s a game, of course, but I think there’s something enticing about the possibility of not being found. That someone could actually stay hidden till they wanted to be discovered.

Growing up, I remember playing hide and seek all over our neighborhood with the other kids on the block. No place outside was off limits; no one could hide indoors. We had the best hiding places–high up in trees, scrunched down in window wells, hidden under piles of cut grass. The one who had the best hiding place, who could stay hidden the longest, was the winner of the day. There were times when the places we hid were so good that someone wouldn’t be found. They’d pop out after awhile, keeping their special place a secret.

My daughter and her family have finally been able to move into their new home. Boxes and furniture and bags and toys have been scattered everywhere as permanent homes are being found for this stuff. Everyone’s arms seem to be filled with something that they’re transporting from one spot to another. Isley, at two and a half, was getting fed up with being moved aside like so much baggage. No one was paying attention to her. So she hid. In plain sight. Behind glass doors. Taking the dog with her.

I know what it’s like to want to hide. I wouldn’t be as obvious as Isley–I’d hide where I couldn’t be found.

What makes me want to hide? What makes anyone want to hide? Disappointment in myself, frustration, being overwhelmed by the minutia of life, feeling unloved, unknown and unappreciated. At those times, hiding means not wanting to deal with what I’m being confronted with. Hoping others will forget what I don’t want to remember. Denial.

But hiding helps nothing, much like Isley’s glass doors. Hiding doesn’t change circumstances. Hiding doesn’t move me forward. It paralyzes me. And it never makes me feel better about myself.

God doesn’t let me hide from Him. He’s with me whether I feel Him there or not. He’s tender in His persistence and gentle in His presence. I’m never lost to Him.

“I can never escape from Your Spirit! I can never get away from Your presence! If I go up to heaven, You are there; if I go down to the grave, You are there. If I ride the wings of the morning, if I dwell by the farthest oceans, even there Your hand will guide me, and Your strength will support me. I could ask the darkness to hide me and the light around me to become night–but even in darkness I cannot hide from You. To You the night shines as bright as day. Darkness and light are the same to You.”  Psalm 139:7-11

Hiding may feel like a momentary reprieve, but it’s a lie. Hiding isn’t what I want.

I want to be found.

Posted by daylerogers on February 28, 2013 in Uncategorized and tagged being found, denial, escape, God, hiding, lost.