The Mutt in Me 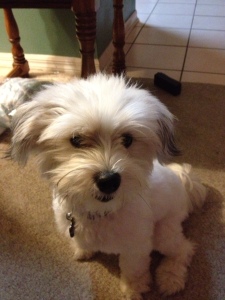 When I was younger, I knew I was an avid animal lover.  My dream was to own a pet rescue facility and take care of animals that were rejected by owners or given up by those pressured by their circumstances.

Where Frisco is concerned, I’m an animal tolerator.

Frisco is our resident pooch, a Havanese belonging to my daughter’s family.  A little hair ball rather than a fur ball, so he doesn’t cause severe allergic responses.

He does, however, cause all other kinds of responses.

He’s a little alpha dog, marking, barking and generally charging around the house as if it’s his job.  His predisposition towards chewing has marked the demise of small stuffed animals and anything rubbery.  When anyone enters the house, his bark can be heard everywhere.  How does such a little dog have such a big voice?

I was walking him this morning, and he trotted ahead of me with all the bravado of the champ entering the ring.  No tree or bush or pole was left untouched–Frisco was persistent and thorough in his efforts to claim his territory.

And then we got to the main street.

Not only was there a lot of traffic.  There were also men mowing and edging on both sides of the sidewalk.  A little gauntlet of sound and machine.

Frisco froze.  The alpha oozed out of him as his ears perked up, his head jerked from side to side and he couldn’t decide which way to run.  The length of the leash limited him, but it didn’t reduce his frenetic actions.

I actually felt sorry for him.  For a moment.

And then I realized I was Frisco.  Not in marking my territory, mind you, but in the thinking that I’ve got my life figured out, that I can control what I will do and how I’ll do it.  And just by acting as if I was in control, I would be.

Control?  What a myth.  We all have our own little gauntlets to endure.

It’s a rude awakening to discover that you’re not all that.  To recognize that your limitations are indeed limiting.  Just as Frisco is limited by a leash that I hold (combined with his healthy fear of big cars), I’m limited by the sin that reigns me in, which keeps me from being the person I know God created me to be.  It’s not that I don’t have plans to be better–I desperately desire to be more than I am.  To be better than I am.

What I need to see is that it isn’t my sin that now defines me but the redemption that Christ accomplished on my behalf.  If I see myself limited by that leash of sin rather than being hopeful in the finished work of Christ, I will always be frustrated by what I can’t do.  I need to glory in belonging to Jesus, in what He has done–and completed.

And I can chew on that for quite awhile.