The New Never Gets Old

He made his entrance in a very planned, very orderly way. Completely different from his most recent cousins. He wasn’t in a hurry. He was a bit upset leaving “home”.

Warden Mark Sibben was born Tuesday morning at 7:57 a.m. Caesarean-section. Not an easy one.

I watched my daughter and her husband as they were in awe over this little boy. They had a sense of wonder as they looked him over, marveling at his slender fingers and tiny nails. Body parts we take for granted as we get older 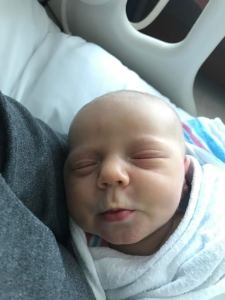 become the objects of fascination for parents of newborns.

Sloane, almost two, didn’t exhibit the same appreciation for her new brother. There was a concerned look on her face as she entered the room and saw Mom holding this tiny baby. They’d talked about her new brother for months, but he wasn’t on the scene then. Now present, he was occupying space and time she could have considered hers.

Until she got close to Ward. She began to point out his eyes and nose. Just like hers. She took her shoe and sock off and held her foot up to his and saw the same number of toes. Only smaller.

There will be an adjustment ahead for all of them. Mom won’t always be available to play games with Sloane. Dad won’t be available to read all the books she loves every time she asks. She’ll learn to share time and space with this new member of the family. Someone who isn’t all that much fun to play with now. Someone who needs to rely on her folks for every need he has. Now.

Sloane’s just getting to the point of relishing her own independence. Of insisting “no” when she doesn’t want to do something. She’s developing autonomy while Ward enters the world in total need of having everything provided for him. Where she can “do it myself”, he can do nothing.

My daughter and son-in-law, however, show such love and tenderness to their children that no one would question that those two young ones are valued.

Meeting their needs, however, looks different because they are different.

God looks at each of His own with such an incredible amount of tenderness and joy that we can’t conceive of how well He cares for us. He loves doing good things for us, but like the loving Father He is, not everything we want is good for us. And how He meets each of us in our need, desires and pain will be different because we are all different.

Because Jesus paid the price for our wrongs , when we receive His gift of forgiveness, we are seen as brand new to Him. Clean and fresh with no blemish or spot. He made us with delight and sees us with holy wonder.

Not everyone will become a parent. But all of us have the opportunity to become a child of the best Father ever. One who sees us fully, loves us unconditionally and forgives us freely. Known and valued perfectly. Always.

That’s the kind of new that never gets old.