He Ain’t Heavy, He’s My Friend

When I was a kid, I shared a bedroom with my two sisters. I slept in the top bunk–it gave me options to lob stuffed animals and pillows at my two sisters from my lofty perch.

I always wanted a room of my own. To have some personal space. To shut my door and not have to let anyone in.

Some of those sentiments resurfaced as our group volunteered at the Orlando Union Rescue Mission. It didn’t feel the same as when I was younger. I sensed a different attitude at this place.

I don’t often take the opportunity to be around folks who are down on their luck, homeless, drifting. I pass them on the exit

ramps, at intersections, asking for money, food. We’ve given both to people in need. Have listened to their stories. Some of which are amazing.

And I’d question whether or not it’s a con.

What surprised me about our time at the Rescue Mission was the excellence with which they did everything. They had facilities for men, women, women with children and families. They provided the opportunity for those who hadn’t finished high school to earn their high school diploma–not just a GED. They offered job training and the chance to learn how to write a resume and interview for a job.

They moved them from hurting and helpless to a point of personal sustainability. Getting a job and getting out on their own.

They did take in emergency cases, but those who wanted to live there had to apply for positions. For a place to stay and the chance at the training. They had to be willing to work. 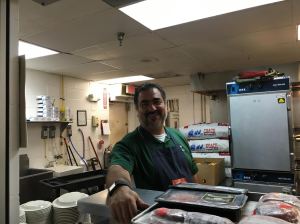 I met wonderful people. Janene worked with the children, urging smiles and giggles from the shy ones. Julio worked as the chef in the main kitchen. He’d been there for four years and had earned his spot and his keep. Joanne worked in the Thrift Shop run by OUR Mission and had worked herself into a sales position.

They all had stories. They’d all seen hard times. But what each person wore with pride was more than a new set of clothes or a safe place to live.

They had rooms which they kept with pride. Clean. Picked up. Orderly.

Even the families living together in one room.

Each of them had a job, and they saved 75% of their incomes for when they’d be on their own.

They were shown value. Worth. That their lives mattered.

The OUR Mission is run by followers of Jesus who seek to show respect and love to those who are down on their luck. They don’t just fill their stomachs with a meal and move them on.

They help them find a life and purpose and hope in a God who doesn’t forget anybody. And in the process, they get a new beginning. For many, it may be the first time anyone has believed in them.

I’ve taken for granted opportunities I’ve had to better myself or my situation. Haven’t been appreciative.

True gratitude comes from true need being met unexpectedly. From recognizing there’s no entitlement. There’s only receiving, humbly and with gratitude.

I need to rethink that shared bedroom.