I’ve been a soccer fan for a long time.

Twenty five years, to be exact. It happened when I took on the role of soccer mom.

I freely admit I knew nothing of the game when my kids began playing. It wasn’t a popular sport when I was a kid. (Did they even play it back in the day?) But it became exciting to watch as kids ran up and down the field. Chasing and kicking a ball. Sometimes in a pack. Sometimes a lone player streaking past everyone else and scoring.

They got better. I became more knowledgeable. Understanding increased enjoyment of the game. 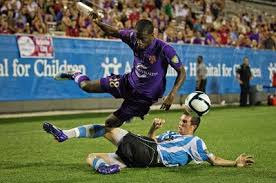 And I could stand alongside a field and scream with the best of them.

I’ve got six kids. And a very loud voice.

It became comical. My husband wouldn’t stand with me because of my persistent loudness.

He said it took away from his enjoyment of the game. He moved down the field.

More power to him.

I get the excitement of watching your kids play well. Encouraging them as they improve. Doing it loudly. With family-friendly words. 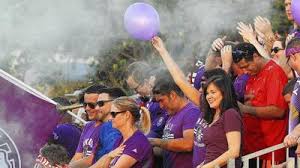 So it was with some amusement that I read in our local paper about the loud, cursing Orlando City Lions’ fans.

Orlando recently got their own MLS team. The Lions had been a semi-pro team for awhile. And had developed a solid fan base.

Incredibly vocal. Not always cultured in their vocabulary. (Their “F” word wasn’t a good one.)

I understand such colorful cheering is typical of soccer fans around the world.

Those fans, however, weren’t among those parents who’d brought their kids to watch the Lions play at Disney’s Wide World of Sports. The family-friendly place.

I’m not fond of that word myself. Recently we were driving home, having the right of way in moving through an intersection. We didn’t move quickly enough. A gentleman approaching quite a bit beyond the speed limit, not willing to slow down, sought to urge us through faster with the use of his

I understand how easy it is to get carried away in the moment. To speak as those around you are speaking. I recognize that I can be easily influenced by those I spend time with.

I don’t want to be a sheep. Mindlessly following a herding instinct.

Or a verbal instinct.

I want my words to reflect that sense of rightness.

Jesus commented on how our words and actions should come across.

“Let Me tell you why you are here. You’re here to be salt-seasoning that brings out the God-flavors of this earth. If you lose your saltiness, how will people taste godliness? You’ve lost your usefulness and will end up in the garbage.”   Matthew 5:13.

I get excited. But I don’t ever want to lose sight of how my words affect those who may be listening to me.

After all, I’m a big Follower of the One who is totally Fair.