It’s All About Nothing

I love a good “Seinfeld” rerun.

The show that was about nothing in particular focused on the relationships of four quirky friends. And their obsessiveness with minutia and pettiness. No major ongoing plot. No significant problem to identify or solve. No challenges to overcome.

Just moseying along, focusing on nothing.

My life is currently a Seinfeld rerun. Complete with quirky people. Most of whom are related to me.

Not that I want to expend all my energy on nothing. But nothing is becoming the life-sucker that’s draining me.

May is the new December. I marvel every year how we seek to squeeze parties, gatherings and massive celebrations into the few short weeks before Christmas. Gatherings we should be having throughout the year. It’s a frenzied attempt to see and celebrate with everyone we’ve ever known.

May is becoming like that. But instead of Christmas trees and candy canes, everything is decked out for graduations and weddings. New beginnings all around.

None of this is nothing. This is all truly something. Special somethings.

The nothing comes in the way I’ve organized them in my life.

There is no organization.

I spent over a half hour the other day looking for the list of the graduation parties we’ve been invited to. Convinced I’d written a list. 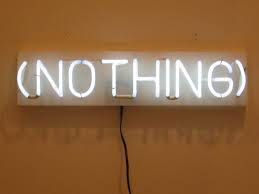 I was looking for nothing.

My oldest daughter and her family are taking off for a short-term mission project this summer. They’re taking Debbie along as a nanny. I was helping her figure out what she needed to take with her. We needed to go shopping.

Somewhere in some store, I lost my little change purse that has no change but holds several gift cards I was going to use. Sometime. I told Debbie about my loss, and she came up with a solution that was actually logical. But I wasn’t listening to what she was saying, so I thought she was being insensitive.

So we argued about nothing.

I can become overwhelmed by the nothings that will fill my life. So much so that I forget the somethings that I should be focusing on.

Crises are different. They push me to action. Waiting to act in a crisis can be tantamount to personal implosion.

Nothing issues push me to piddle. Putz. Which leads to annoyance. Being bothered.

And there goes the temper.

Everything in our lives has value to God, however. Nothing is so insignificant we can’t bring it to Him.

“Don’t worry about anything; instead, pray about everything. Tell God what you need, and thank Him for all He has done. Then you will experience God’s peace, which exceeds anything we can understand. His peace will guard your hearts and minds as you live in Christ Jesus.”   Philippians 4:6-7

I don’t need to be bothered by the nothings. I need to unload them. In the right place.

Jesus waits to hear what’s on my mind. And to care about them with me.

Posted by daylerogers on May 22, 2014 in Uncategorized and tagged God, Jesus, nothing, pettiness, Seinfeld.