Clean or Chaos–It’s All The Same

We’re well into spring. Cleaning is not even close to being on my mind.

My philosophy is that living spaces need to be clean enough to not spread contagions to all who enter. I’m relaxed enough to know a little dirt never killed anyone.

We’ve recently had a lot of family come into town. All needed a place to sleep. 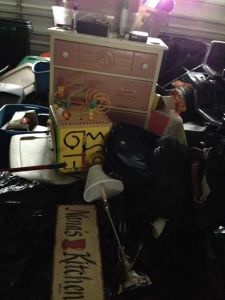 Not easy when two of our bedrooms were still the repositories for all the stuff we haven’t gone through since we’ve decluttered the downstairs. Things we need to sort, store, give away, throw away.

I did what any self-respecting woman would do, especially while her husband is out of town.

I moved everything to the garage. And his office.

The bedrooms were inhabitable. Decluttered, vacuumed and dusted.

You can’t get through the garage. Or John’s office. He will have to climb mounds of things to find his desk.

Not my fault. He left me no choice.

I didn’t really clean anything up. I just moved the mess. To an acceptable place.

Life lived in chaos. Inhabiting the clutter. Making amends with the messy.

I’m a functional messy. A trait, sadly, that I’ve bequeathed to each of my children in some form or other.

When Heather was in college, a logistical decision was made that soon showed itself to be a poor decision. She was given the closet right behind the door to their room. Which shouldn’t have been a problem.

But Heather is also a functional messy. Her closet was bulging with her stuff, so much so that she couldn’t close the door to her closet.

Which made it impossible to open the door to their room all the way. 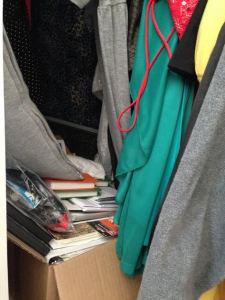 Not a problem if you’re just slipping in and out. But when moving something into or out of the room, it caused a bit of frustration for her roommate.

Heather’s chaos oozed onto her roommate. Whose lack of appreciation for her messiness oozed back to Heather.

Confrontation and compromise were the results.

I’ve found my life reflects that same messiness. I’m not a disaster, but I’m no neat freak, either.

However, that doesn’t translate to me internally.

I often care more about my outward self than I do about my inward appearance. Heart issues.

I can stuff the messy pretty far down and smack a smile on my face. And people often take that for the real me.

Not really seeing past what I’m unwilling to expose.

Like Elsa in “Frozen”–conceal, don’t feel. What they don’t know can’t hurt you.

It works great for a movie. It wreaks havoc on life.

After Adam and Eve chose to disobey God’s one command in the Garden of Eden, they hid from Him. They didn’t want to admit they’d done wrong. Didn’t want to deal with the consequences of what they’d chosen to do. Hiding was easier than dealing. For the moment.

I can’t hide from God. He knows me perfectly. He’s forgiven me completely because of what Jesus accomplished on the cross.

The perfect sacrifice to satisfy His purity. In love.

My messiness doesn’t overwhelm or confuse God. He gets it. He provided for it.

A clean I can’t get on my own.

I’ll take His clean over my messy any day.